Saad Z. Hossain's novels include Escape from Baghdad! and Djinn City. He lives in Dhaka, Bangladesh.

S. L. Huang has a math degree from MIT and is a professional stuntwoman & armorer who has worked in Hollywood on Battlestar Galactica and a number of other productions. Her short fiction has appeared in Strange Horizons, Nature, Daily Science Fiction, and The Best American Science Fiction & Fantasy 2016. She is the author of Zero Sum Game, Null Set, and Critical Point.

Nghi Vo was born in central Illinois, and she retains a healthy respect of and love for corn mazes, scarecrows, and fifty-year floods. These days, she lives on the shores of Lake Michigan, which is less a lake than an inland sea that she is sure is just biding its time. Her short fiction has appeared in Strange Horizons, Uncanny Magazine, PodCastle, Lightspeed, and Fireside. Her short story, “Neither Witch nor Fairy” made the 2014 Tiptree Award Honor List. Nghi mostly writes about food, death, and family, but sometimes detours into blood, love, and rhetoric. She believes in the ritual of lipstick, the power of stories, and the right to change your mind.

JY Neon Yang is the author of the Tensorate series of novellas from Tor.Com Publishing (The Red Threads of Fortune, The Black Tides of Heaven, The Descent of Monsters and The Ascent to Godhood). Their work has been shortlisted for the Hugo, Nebula, World Fantasy, Lambda Literary and Locus awards, while the Tensorate novellas were a Tiptree honoree in 2018. They have over two dozen works of short fiction published in venues including Tor.com, Uncanny Magazine, Lightspeed, Clarkesworld, and Strange Horizons. Neon attended the 2013 class of Clarion West, and received their MA in Creative Writing from the University of East Anglia in 2016. In previous incarnations, they have been a molecular biologist, a writer for animation, comics and games, a science communicator, and a journalist for one of Singapore’s national papers. Neon is currently based out of Singapore. They are queer and non-binary. 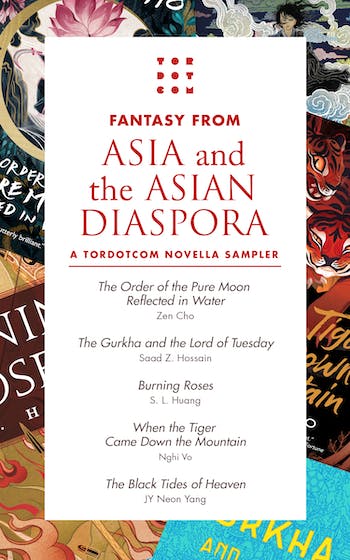