SCOTTO MOORE is a Seattle playwright, whose works include the black comedy H.P. Lovecraft: Stand-up Comedian!, the sci-fi adventures Duel of the Linguist Mages and interlace [falling star], the gamer-centric romantic comedy Balconies, and the a cappella sci-fi musical, Silhouette. He is the creator of The Coffee Table, a comedic web series about a couple that discovers their new coffee table is an ancient alien artifact that sends their house shooting through the void. He is also behind the popular Lovecraft-themed meme generator, Things That Cannot Save You (“a catalog of your doom”), which spawned his novella, Your Favorite Band Cannot Save You. Moore's debut novel, Battle of the Linguist Mages, was met with widespread critical acclaim, with the New York Times calling it "...an audacious, genre-bending whirlwind." Battle of the Linguist Mages

“This is a stand-alone novel with material enough for six... By the halfway point, it had blown my mind twice... an audacious, genre-bending whirlwind.” —New York Times 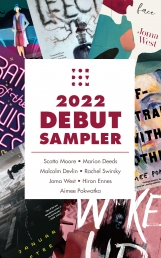 Tordotcom Publishing is proud to present a sneak peek of its 2022 debut novel and novella authors.

In modern day Los Angeles, a shadowy faction led by the Governor of California develops the arcane art of combat linguistics,...

Scotto Moore's Wild Massive is a glorious web of lies, secrets, and humor in a breakneck, nitrous-boosted saga of the small rejecting the will of the mighty.

Welcome to the Building, an infinitely tall skyscraper in the... Your Favorite Band Cannot Save You

Your Favorite Band Cannot Save You is a story of music, obsession, violence, and madness by Scotto Moore

I was home alone on a Saturday night when I experienced the most beautiful piece of music I had ever heard in...