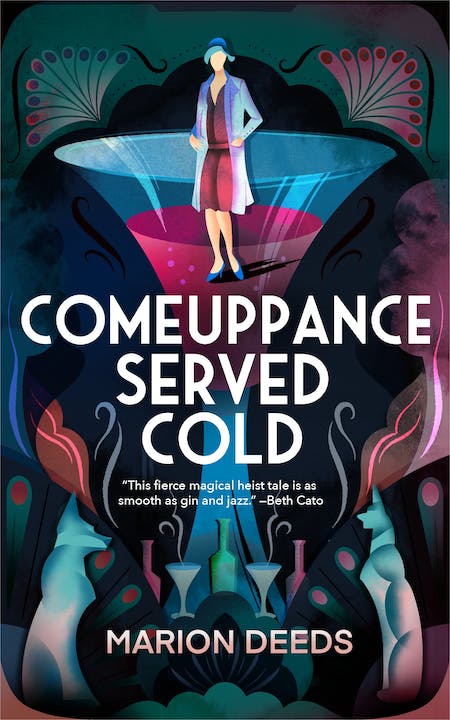 Marion Deeds's Comeuppance Served Cold is a hard-boiled historical fantasy of criminality and magic, couched in the glamour of Miss Fisher's Murder Mysteries.


A Most Anticipated Pick for Buzzfeed | Bustle | Autostraddle | The Nerd Daily

A respected magus and city leader intent on criminalizing Seattle’s most vulnerable magickers hires a young woman as a lady’s companion to curb his rebellious daughter’s outrageous behavior.

The widowed owner of a speakeasy encounters an opportunity to make her husband’s murderer pay while she tries to keep her shapeshifter brother safe.

A notorious thief slips into the city to complete a delicate and dangerous job that will leave chaos in its wake.

One thing is for certain—comeuppance, eventually, waits for everyone.

A Most Anticipated Pick for Buzzfeed | Bustle | Autostraddle | The Nerd Daily

"I love a good heist, and this is a beautifully constructed magical heist in turn-of-the-century Seattle."—Mary Robinette Kowal

"This fierce magical heist tale is as smooth as gin and jazz."—Beth Cato

"Catnip for those who like watching con artists walk the tightrope of trickery and lies."—Marie Brennan

"[A] captivating noir fantasy. . .Deeds presents all this intrigue in reverse chronological order, spinning out mysteries that will keep readers guessing till the end. The result is a well-crafted puzzle; readers’ only complaint will be that they want more."—Publishers Weekly, starred review

"Readers who love heist and caper stories will be thrilled with Dolly and her quest to deliver much-deserved comeuppance to those who believed they are above the law. The gas-lamp setting gives just the right touch of magic and creeping dread to Deeds’s novel."—Library Journal

"A deliciously fun novella set in 1929 Seattle is just what is needed for your bookshelves. . . .Beginning at the ending and following the path backwards through a magical heist, this story brings comeuppance to all."—Buzzfeed

"Deeds tells her story with nuance and subtly, luring you into a false sense of pleasantry. From the first page to the very last word, I was enthralled with this tale of thievery and lies."—Grimdark Magazine

“The prize for most original book I’ve read in a while goes to Comeuppance Served Cold. . . .Full of stylish moments and taut conversations where witticisms fly but care must be taken over every single word, this is a novel that carries itself with a wink and nod but is actually deadly serious.”—Locus