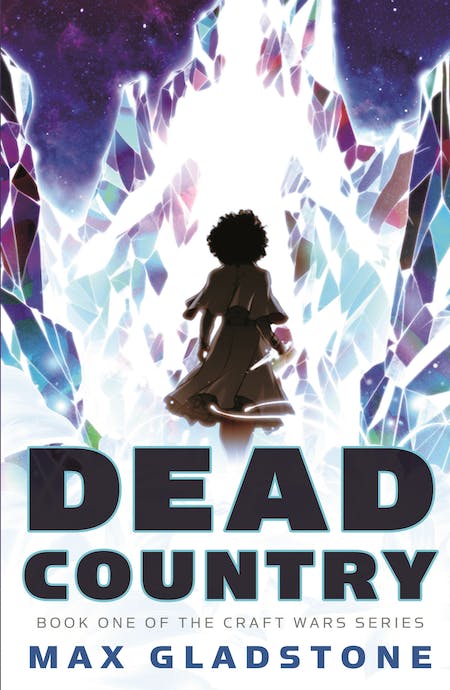 Discover the destiny of the Craft in Dead Country, the standalone entry point to Max Gladstone's beloved fantasy epic.

BOOK ONE OF THE CRAFT WARS SERIES

Since her village chased her out with pitchforks, Tara Abernathy has resurrected gods, pulled down monsters, averted wars, and saved a city, twice. She thought she'd left her dusty little hometown forever. But that was before her father died.

As she makes her way home to bury him, she finds a girl, as powerful and vulnerable and lost as she once was. Saving her from raiders twisted by the God Wars, Tara changes the course of the world.

Dead Country is the first book in the Craft Wars Series, a tight sequence of novels that will bring the sprawling saga of the Craft to its end, and the perfect entry point to this incomparable world.

Hugo, Nebula, and Locus Award–winning author, MAX GLADSTONE, has been thrown from a horse in Mongolia and once wrecked a bicycle in Angkor Wat. He is the author of many books, including Last...

“Intimately personal… and vast enough to change everything. New readers and returning fans alike will be eager for more.” —Publishers Weekly

“If you read fantasy or sci-fi, if you enjoy clever thoughts and unique worldbuilding, if you want something new and fresh and sharp: This is the book for you. Seriously.” —Patrick Rothfuss, author of the Kingkiller Chronicles, on Three Parts Dead

“Gladstone packs a lot into his tale (including a brilliant sequence in which Kai encounters another trans person who lacked Kai’s access to divine resources), and longtime readers may find some of his choices surprising.” —Publishers Weekly Starred Review, on Ruin of Angels

“Suspenseful and fast-paced throughout, and the diverse, female-led cast is a joy to follow through the fascinating and unusual landscape.” —Publishers Weekly, starred Review, on Three Parts Dead

“This book has it all: treachery and love, lyricism and gritty action, existential crisis and space-opera scope, not to mention time traveling superagents. Gladstone's and El-Mohtar's debut collaboration is a fireworks display from two very talented storytellers.” —Madeline Miller on This is How You Lose the Time War

“An intimate and lyrical tour of time, myth and history. Read it.” —New York Times bestselling author John Scalzi on This is How You Lose the Time War

“A unique band of adventurers that change each other for the better. It was a wild ride.” —Martha Wells, Hugo Award-winning author on Empress of Forever

“[A] deliriously strange novel of alternate universes and dysfunctional explorers. This gloriously metaphysical adventure will stick with you long after you return to the so-called real world.” —Hugo and Nebula Award-winning author Charlie Jane Anders on Last Exit