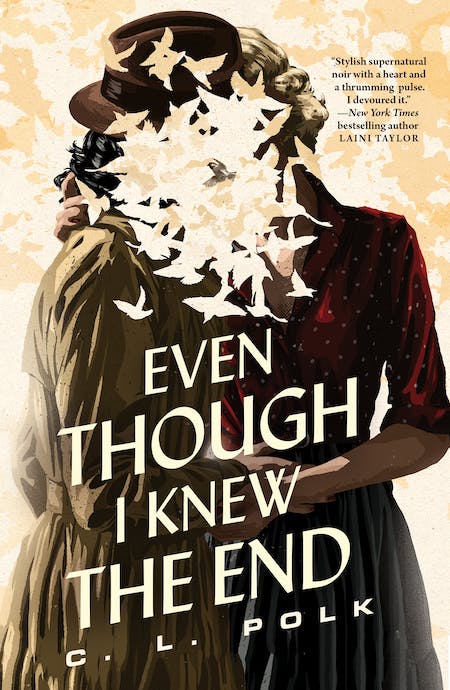 C. L. Polk turns their considerable powers to a fantastical noir with Even Though I Knew the End.

“Stylish supernatural noir with a heart and a thrumming pulse. I devoured it.”—Laini Taylor

A magical detective dives into the affairs of Chicago's divine monsters to secure a future with the love of her life. This sapphic period piece will dazzle anyone looking for mystery, intrigue, romance, magic, or all of the above.

An exiled augur who sold her soul to save her brother's life is offered one last job before serving an eternity in hell. When she turns it down, her client sweetens the pot by offering up the one payment she can't resist—the chance to have a future where she grows old with the woman she loves.

To succeed, she is given three days to track down the White City Vampire, Chicago's most notorious serial killer. If she fails, only hell and heartbreak await.

“Stylish supernatural noir with a heart and a thrumming pulse. I devoured it.” —Laini Taylor

“This is a must-read for those who like their queer fantasy with a little grit and a lot of soul (pun intended).” —Booklist, starred review

“Even Though I Knew the End rockets along from the very first page, with the details of author C.L. Polk’s alternate Chicago revealing themselves exactly when required.” —BookPage, starred review

“Even Though I Knew the End is Polk at the height of their considerable powers: romance, enchantment, tragedy, and courage to the bitter end.” —Elizabeth Bear

“Bracing as a slug of bourbon, with a twist of pain on the drop—or is that hope? Polk’s back with a cold-eyed winner.” —Max Gladstone

“Vivid and charming with a touch of noir edge, but way more heart.” —Rebecca Roanhorse

“A layered exploration of love and power with genuine emotional stakes and a soaring, perfectly bittersweet payoff. It’s another winner.” —Publishers Weekly