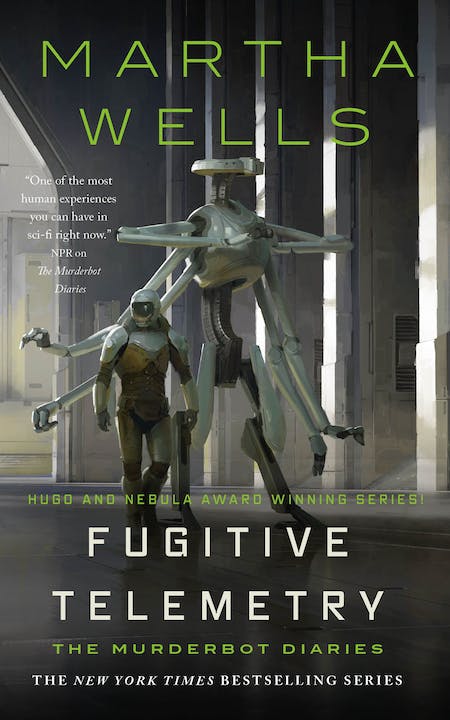 The New York Times bestselling security droid with a heart (though it wouldn't admit it!) is back in Fugitive Telemetry!

Having captured the hearts of readers across the globe (Annalee Newitz says it's "one of the most humane portraits of a nonhuman I've ever read") Murderbot has also established Martha Wells as one of the great SF writers of today.

No, I didn't kill the dead human. If I had, I wouldn't dump the body in the station mall.

When Murderbot discovers a dead body on Preservation Station, it knows it is going to have to assist station security to determine who the body is (was), how they were killed (that should be relatively straightforward, at least), and why (because apparently that matters to a lot of people—who knew?)

Yes, the unthinkable is about to happen: Murderbot must voluntarily speak to humans!

“Martha Wells' newest entry in her award-winning, nerd-charming, trope-bending Murderbot series, Fugitive Telemetry, is a lot of things that you probably don't expect. It is an unadorned whodunit. A cozy mystery garlanded with plasma cannons and spaceships... One of Wells' superpowers has long been her ability to pack an epic's worth of material into a very small package.” —NPR

“Wells... creates a main character who is addictive... Murderbot continues to bring intelligence and acerbic commentary on humanity to the forefront.” —Library Journal

“Murderbot’s wry observations of human behavior are as humorous as ever and the mystery is thoroughly satisfying. This is another winning series installment.” —Publishers Weekly


More praise for The Murderbot Diaries

“We are all a little bit Murderbot.”—NPR