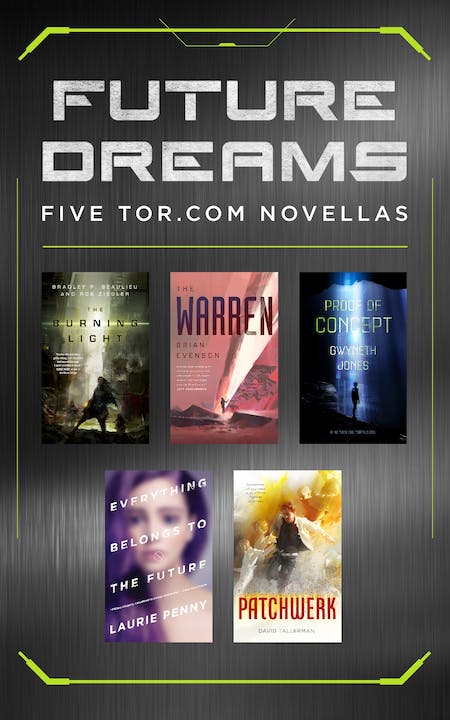 The Burning Light by Bradley P. Beaulieu and Rob Ziegler
Disgraced government operative Colonel Chu is exiled to the flooded relic of New York City. Something called the Light has hit the streets like an epidemic, leavings its users strung out and disconnected from the mind-network humanity relies on. Chu has lost everything she cares about to the Light. She’ll end the threat or die trying.

The Warren by Brian Evenson
X doesn’t have a name. He thought he had one—or many—but that might be the result of the failing memories of the personalities imprinted within him. Or maybe he really is called X.

Proof of Concept by Gwyneth Jones
On a desperately overcrowded future Earth, crippled by climate change, the most unlikely hope is better than none. Governments turn to Big Science to provide them with the dreams that will keep the masses compliant. The Needle is one such dream, an installation where the most abstruse theoretical science is being tested.

Everything Belongs to the Future by Laurie Penny
A bloody-minded tale of time, betrayal, desperation, and hope that could only have been told by the inimitable Laurie Penny.

Patchwerk by David Tallerman
Fleeing the city of New York on the TransContinental atmospheric transport vehicle, Dran Florrian is traveling with Palimpsest-the ultimate proof of a lifetime of scientific theorizing. When a rogue organization attempts to steal the device, however, Dran takes drastic action.

Laurie Penny is an author, journalist and screenwriter from London. They are a culture writer for Wired magazine and have written for the Guardian, New Statesman, New York...

David Tallerman is the author of the Tales of Easie Damasco fantasy trilogy, the graphic novel Endangered Weapon Band around a hundred short stories, comic and film scripts.