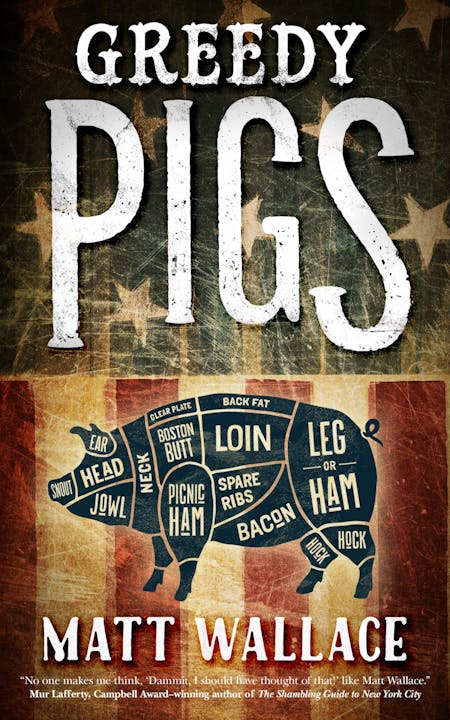 “I never did give them hell. I just told the truth, and they thought it was hell.”

Politics is a dirty game. When the team at Sin du Jour accidentally caters a meal for the President of the United States and his entourage, they discover a conspiracy that has been in place since before living memory. Meanwhile, the Shadow Government that oversees the co-existence of the natural and supernatural worlds is under threat from the most unlikely of sources.

It’s up to one member of the Sin du Jour staff to prevent war on an unimaginable scale.

"Matt Wallace’s Sin du Jour series is a crass, funny, gross, and sweet blend of fight sequences and top chef cooking, with entertaining characters and their all too human (and extra-human) dilemmas the cherry on top. Chicken nuggets and the Easter Bunny will never look the same to you again." —Kate Elliott, author of Black Wolves and Court of Fives

"Though new readers will have little trouble losing themselves in this story, they shouldn’t miss out on the dark delights of this entire series." —RT Book reviews Top Pick

"Wallace's imagination is boundless, and his wryly funny storytelling manages to be heartfelt and completely gonzo at the same time." —Publishers Weekly

"This series continues to combine magic, food, and a hefty scoop of humor." —Library Journal

Praise for Envy of Angels —

"No one makes me think, 'Dammit, I should have thought of that!' like Matt Wallace. The Sin du Jour series is something I read with equal amounts of envy and delight." — Mur Lafferty, Campbell Award winning author of The Shambling Guide to New York City

"Matt Wallace tells a raucous, riotous tale of culinary madness — a jaw-dropping horror-fantasy restauranteur Thunderdome that makes the 'monkey brain' scene in Temple of Doom look like something you'd see on Nickelodeon. It's like I dropped a heroic dose of acid and turned on the Food Network for eight hours. It's funny and demented and sticks in you like a pinbone. Matt Wallace writes like someone just jammed a needle full of adrenaline in his heart — and then, in yours. From this point forward, I'll read anything this guy writes." — Chuck Wendig, author of Blackbirds and Zer0es

"Envy of Angels is one of the most original urban fantasies I've read in a damn long time. Angels, demons and the New York restaurant scene. It doesn't get any weirder than this. Matt Wallace is an author to watch." — Stephen Blackmoore, author of Dead Things and Broken Souls

"Envy of Angels is exactly the breath of fresh air I didn't know I needed: darkly funny, sweepingly inventive, and just plain fun to read. Every time I thought I got the hang of this book, the next turn took me someplace even more breathtakingly weird and wonderful. Buy it. DO IT NOW. It's the only way we can force him to write a dozen more of these!" — Andrea Phillips, author of Revision