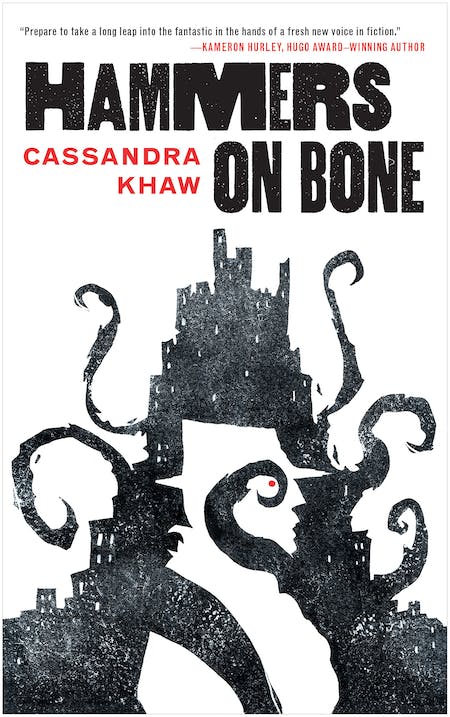 Cassandra Khaw bursts onto the scene with Hammers on Bone, a hard-boiled horror show that Charles Stross calls "possibly the most promising horror debut of 2016." A finalist for the British Fantasy award and the Locus Award for Best Novella!


John Persons is a private investigator with a distasteful job from an unlikely client. He’s been hired by a ten-year-old to kill the kid’s stepdad, McKinsey. The man in question is abusive, abrasive, and abominable.

He’s also a monster, which makes Persons the perfect thing to hunt him. Over the course of his ancient, arcane existence, he’s hunted gods and demons, and broken them in his teeth.

As Persons investigates the horrible McKinsey, he realizes that he carries something far darker. He’s infected with an alien presence, and he’s spreading that monstrosity far and wide. Luckily Persons is no stranger to the occult, being an ancient and magical intelligence himself. The question is whether the private dick can take down the abusive stepdad without releasing the holds on his own horrifying potential.

"Khaw brilliantly combines the self-aware, on-point tone of their gumshoe narrator with the invasive rhythm of the language of pulsing terrors. The drearily everyday is infused with Lovecraftian dread in a marvelously horrifying, tightly built novella that spins a satisfying tale while doing honor to both of its core sources." —Publishers Weekly, starred review

"A glorious fusion of the classic noir detective thriller with Lovecraftian horror, like the squamous tentacular lovechild of Raymond Chandler and H. P. Lovecraft hatching from a five-dimensional egg to slouch down these dark streets in search of human minds to flay. Seriously? Possibly the most promising horror debut of 2016, a suitable light in these dark times." —Charles Stross

"Hammers on Bone is sly and amusing and sharp and I wound up digging the hell out of it." —Scott Lynch

"[An] incredible novella... Hammers on Bone transcends its genre – thanks in no small part to its private-investigatorand-monster protagonist and its very London setting – to become a timeless (and disturbing) parable about monsters." —Locus

"Hammers on Bone is an easy read on a hard subject." —BleedingCool