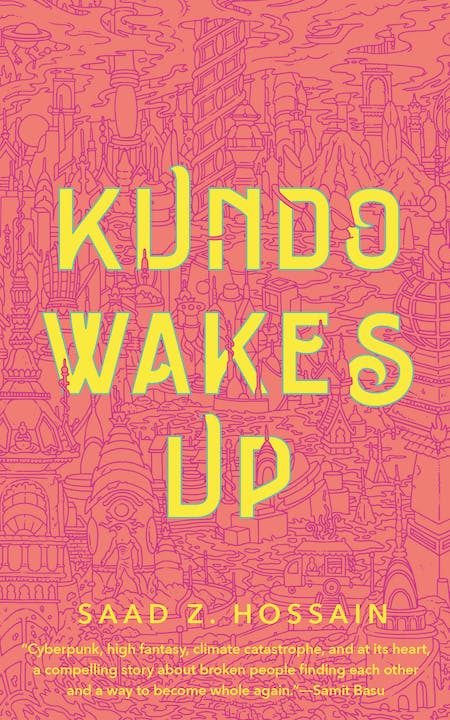 Saad Z. Hossain's Kundo Wakes Up is a companion to the Ignyte and Locus Award-Nominated novella The Gurkha and the Lord of Tuesday.

Kundo, once a famous artist with the Karma points to prove it, goes searching for his missing wife, only to uncover more inexplicable disappearances. And so Kundo and a group of motley companions embark on a tumultuous journey through an overwhelming maze made up of Chittagong’s neighborhoods, the hidden backrooms of video game parlors, and the depths of cyberspace, culminating in the realm of the djinn themselves, in search of love, redemption, and a good meal.

“Hossain showcases the values of cyberpunk, where even cities become corporations to disenfranchise the majority of the world’s population. But even at its darkest, the novel provides hope that people will fight, survive, and thrive.”—Booklist

“Hossain blends futuristic technology and Arabic mythology in this rabbit hole of a mystery. . . . Gaming enthusiasts and ancient mythology fans alike should snap this up.”—Publishers Weekly

“Kundo Wakes Up [is] Hossain’s most mature and unified book to date.”—Locus


Praise for The Gurkha and the Lord of Tuesday