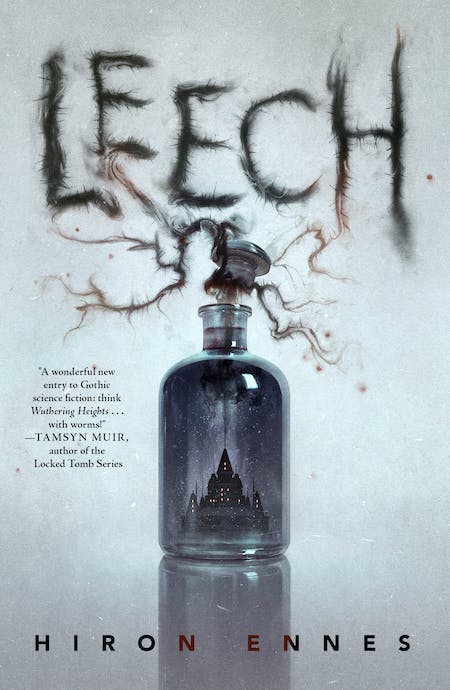 An Amazon Book of the Month!

MEET THE CURE FOR THE HUMAN DISEASE

In an isolated chateau, as far north as north goes, the baron’s doctor has died. The doctor’s replacement has a mystery to solve: discovering how the Institute lost track of one of its many bodies.

For hundreds of years the Interprovincial Medical Institute has grown by taking root in young minds and shaping them into doctors, replacing every human practitioner of medicine. The Institute is here to help humanity, to cure and to cut, to cradle and protect the species from the apocalyptic horrors their ancestors unleashed.

In the frozen north, the Institute's body will discover a competitor for its rung at the top of the evolutionary ladder. A parasite is spreading through the baron's castle, already a dark pit of secrets, lies, violence, and fear. The two will make war on the battlefield of the body. Whichever wins, humanity will lose again.

HIRON ENNES is a writer, musician, and student of medicine based in the Pacific Northwest. Their areas of interest include infectious disease, pathology, and anticapitalist healthcare reform. When...

“Emotionally complex, wildly inventive, and full of squirming terror... This is a must-read for readers looking for something new from the horror genre.” —Publishers Weekly, starred review

“[A] fascinating jigsaw puzzle... [that] only gets more intriguing as the novel goes on... Fans of gothic horror will devour it.” —Booklist, starred review

“The fascinating world and original narrator that Ennes creates in their debut produce a sublime gothic sci-fi tale that grows into a story greater than the sum of its parts.” —Library Journal, starred review

“Leech is perfect for readers who wished that Wuthering Heights had been just a little more like Jeff VanderMeer’s Annihilation.” —BookPage, starred review

“Worldbuilding both subtle and surprising. Killer prose. Grotesque biology like I’ve never seen. If you’ve ever wondered what would happen if David Cronenberg and Edgar Allen Poe bumped into each other at the same parasitological conference, here's your answer.” —Peter Watts

“Startlingly original, yet eerily familiar, with Leech, Ennes spins classic Gothic horror and fascinating science fiction into a creation that is disturbing, horrifying, and impossible to turn away from.” —Brom

“This book managed to surprise me, and that's not easy for this jaded reader. I read everything, therefore I thought I had seen everything. Leech isn't like anything I've read before.” —Tade Thompson, author of Rosewater

“A strange and fascinating far-future world is gradually revealed in this accomplished combination of gothic horror and sci-fi.” —The Guardian

“Leech is wonderful, with a truly unique protagonist, a gooey, squicky post-apocalyptic setting, and a dose of Gormenghast gothic. Perfect for fans of Gideon the Ninth and The Traitor Baru Cormorant.” —Django Wexler

“A razor-sharp balance between the Gothic and the weird, Leech is a startling surprise. A unique narrator, a complex and twisted world, toe-curling horror — I wanted to keep reading.” —World Fantasy Award-winning author G. V. Anderson

“What a unique book! Surreal body horror, surprising turns, and staggering ideas — all woven together by beautiful writing. This debut novel is one to remember.” —Tim Lebbon