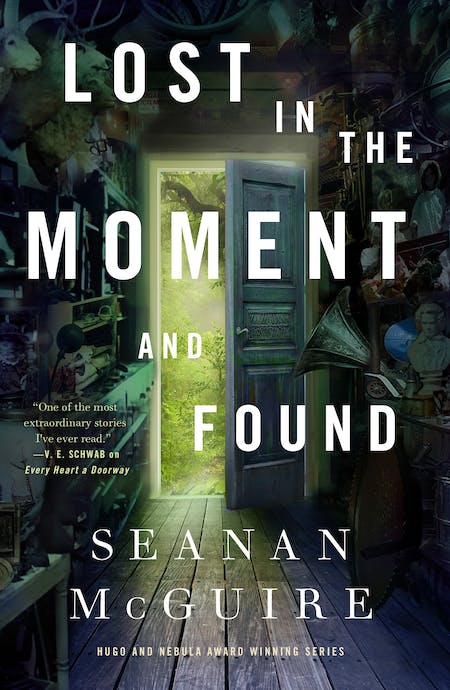 A LibraryReads Hall of Fame Inductee!

A young girl discovers an infinite variety of worlds in this standalone tale in the Hugo and Nebula Award-winning Wayward Children series from Seanan McGuire, Lost in the Moment and Found.

If you ever lost a sock, you’ll find it here.
If you ever wondered about a favorite toy from childhood... it’s probably sitting on a shelf in the back.
And the headphones that you swore this time you’d keep safe? You guessed it….

Antoinette has lost her father. Metaphorically. He’s not in the Shop, and she’ll never see him again. But when Antsy finds herself lost (literally, this time), she discovers that however many doors open for her, leaving the Shop for good might not be as simple as it sounds.

“The eighth book (after Where the Drowned Girls Go) of McGuire’s “Wayward Children” series is a haunting adventure about the loss of childhood innocence and ultimately, about finding strength and belonging. ” —Library Journal, starred review

“I am always in awe of the ways in which McGuire can deliver whimsical magical worlds, while also discussing complex themes…” —Lili, Utopia State of Mind