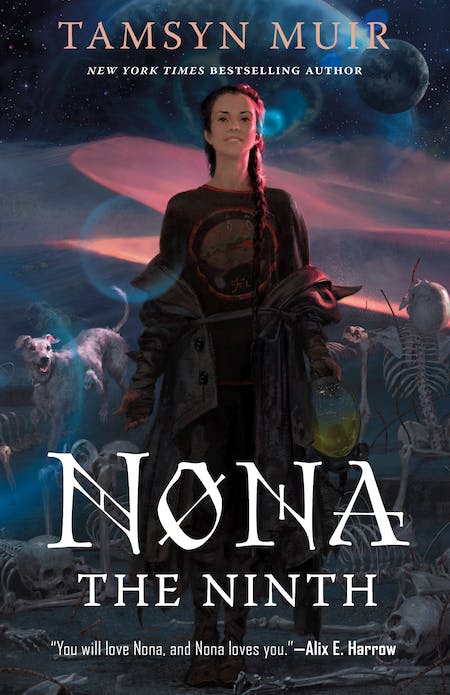 “You will love Nona, and Nona loves you." —Alix E. Harrow

“Unlike anything I've ever read." —V.E. Schwab on Gideon the Ninth

Her city is under siege.

The zombies are coming back.

And all Nona wants is a birthday party.

In many ways, Nona is like other people. She lives with her family, has a job at her local school, and loves walks on the beach and meeting new dogs. But Nona's not like other people. Six months ago she woke up in a stranger's body, and she's afraid she might have to give it back.

The whole city is falling to pieces. A monstrous blue sphere hangs on the horizon, ready to tear the planet apart. Blood of Eden forces have surrounded the last Cohort facility and wait for the Emperor Undying to come calling. Their leaders want Nona to be the weapon that will save them from the Nine Houses. Nona would prefer to live an ordinary life with the people she loves, with Pyrrha and Camilla and Palamedes, but she also knows that nothing lasts forever.

And each night, Nona dreams of a woman with a skull-painted face...

“You will love Nona, and Nona loves you.” —Alix E. Harrow, New York Times bestselling author of The Once and Future Witches

“If you’ve read the first two books in this trilogy, I don’t need to say anything to persuade you to pick up Nona the Ninth. If you don’t know Muir’s characters and worlds yet, then, my god, I envy you. It’s hard to think of anyone more inventive, more audacious—more fun!—who is writing science fiction now.” —Kelly Link

“Nona’s lovely, simple, and occasionally silly voice works especially well in juxtaposition with the dark, dense backdrop of the series so far, creating a riveting contrast. Readers will be on the edges of their seats.” —Publishers Weekly, starred review

“A thrilling, mind-boggling and surprisingly heartwarming story. It hurtles us through time and space, has scientists with God complexes (literally) and features many bouts of necromancy. Be prepared to find yourself yelling, “What? WHAT?” several times over.” —NPR “Books We Love”

“One of the best sci-fi series of all time.” —Cosmopolitan

“You can expect some necromancy, bad jokes and plot twists. And I cannot recommend it enough.” —NPR

“Blending science fiction, fantasy, gothic, horror and comedy should be a disaster, but every page feels as fresh as it is addictive. …For lovers of classic and modern spec fiction alike, this series is not to be missed.” —Australian Financial Review

“A stunning rollercoaster of a read where Tasmyn ups the ante even further. She has a gorgeous talent for burning so many genres together that a new one rises from the ashes, sword at the ready and a delightful quip ready to go.” —Rin Chupeco, author of The Bone Witch

PRAISE FOR THE LOCKED TOMB SERIES

“The patient reader will be rewarded tenfold with brilliant original characters and magic, heartbreaking intimacy, laugh out loud humor and the best damn soup in the galaxy.” —Rebecca Roanhorse on Harrow the Ninth

“Brilliantly original, messy and weird straight through.” —NPR on Gideon the Ninth

“You’ve never read anything like... Gideon The Ninth.” —Forbes on Gideon the Ninth

“Unlike anything I’ve ever read.” —V.E. Schwab, #1 New York Times Bestselling Author on Gideon the Ninth

“From Gideon the Ninth's peerless first line, Gideon Nav is one of the most charismatic narrators I’ve ever met. I would walk through the bowels of hell with her, and basically have.” —Melissa Albert, New York Times Bestselling Author of The Hazel Wood on Gideon the Ninth