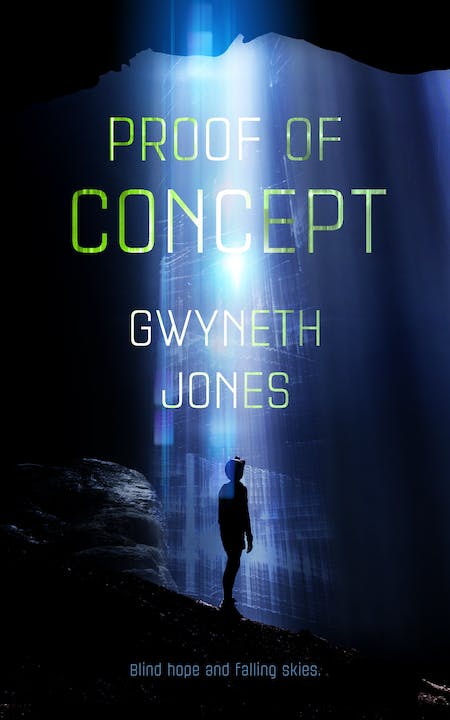 On a desperately overcrowded future Earth, crippled by climate change, the most unlikely hope is better than none. Governments turn to Big Science to provide them with the dreams that will keep the masses compliant. The Needle is one such dream, an installation where the most abstruse theoretical science is being tested: science that might make human travel to a habitable exoplanet distantly feasible.

When the Needle’s director offers her underground compound as a training base, Kir is thrilled to be invited to join the team, even though she knows it’s only because her brain is host to a quantum artificial intelligence called Altair.

But Altair knows something he can’t tell.

Kir, like all humans, is programmed to ignore future dangers. Between the artificial blocks in his mind, and the blocks evolution has built into his host, how is he going to convince her the sky is falling?

"Proof of Concept is proof that Gwyneth Jones is an international treasure. If she writes it, you need to read it––that's all you need to know." —Pat Cadigan, Hugo and Clarke Award-winning author of Synners.

“Proof of Concept engages and excites, its puzzles unwrapping with deft speed. I liked it a lot. Prepare for concept acceleration!” —Gregory Benford, Nebula Award-winning author of Timescape and the Galactic Centre series.

“Proof of Concept has almost everything: a truly fascinating setting in a deeper cave than any we have yet found, an interesting near future society, virtual sex, an AI, a likeable young heroine, a planet (Earth) that's in dire trouble and Post Standard Model Physics that may (or may not) solve the planet's problems. A dense, unsettling, compelling tale written in Gwyneth Jones' usual fine style. I want to visit the cave, and I wouldn't mind knowing more about the theoretical physics.” —Eleanor Arnason

"A terrific, intricately wrought matryoshka doll of a story, crammed with weird science, steeped in the ambience of an authentically strange but thoroughly plausible future." —Paul McAuley

"A delicious portrayal of what it feels like when that nagging voice in your head telling you something is wrong is in fact your only ally." —The Washington Post