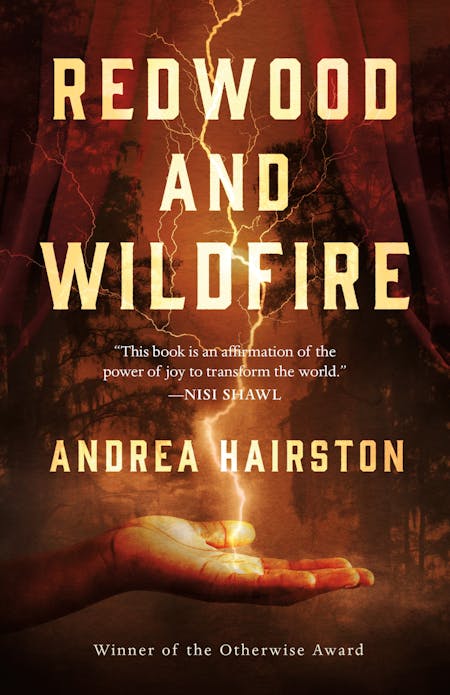 Andrea Hairston's alternate history adventure, Redwood and Wildfire, is the winner of the Otherwise Award and the Carl Brandon Kindred Award.

At the turn of the 20th century, minstrel shows transform into vaudeville, which slides into moving pictures. Hunkering together in dark theatres, diverse audiences marvel at flickering images.

Redwood, an African American woman, and Aidan, a Seminole Irish man, journey from Georgia to Chicago, from haunted swampland to a "city of the future." They are gifted performers and hoodoo conjurors, struggling to call up the wondrous world they imagine, not just on stage and screen, but on city streets, in front parlors, in wounded hearts. The power of hoodoo is the power of the community that believes in its capacities to heal.

Living in a system stacked against them, Redwood and Aidan's power and talent are torment and joy. Their search for a place to be who they want to be is an exhilarating, painful, magical adventure.

Praise for Redwood and Wildfire:

“Hairston captures an impressive depth of tenderness between her leads and makes a moving argument for the power of stories and songs in the face of bigotry. The novel unfurls slowly, allowing each character the space to come into their own fully. It’s a spectacular feat.” —Publishers Weekly, starred review

“[A] tender, but explosive, novel about friendship, magic, and the pain and power that come with not belonging.” —BuzzFeed

“If it’s history and mythology you’re after, another big title...is Andrea Hairston’s Redwood and Wildfire,” —The Washington Post

A BookPage Best Book of February 2022

“Hairston weaves a rich tapestry of folklore and adventure, inviting readers into a well-developed, non-Western fantasy world, while navigating pressing issues of climate change and personal responsibility. This is an urgent, gorgeous work.” —Publishers Weekly, starred review, on Master of Poisons

“Master of Poisons is sheer, undiluted brilliance. Epic, courageous, unapologetically fierce. The world needed an epic fantasy from the unstoppably creative mind of Andrea Hairston, and it's right on time. This is a prayer hymn, a battle cry, a love song, a legendary call and response bonfire talisman tale. This is medicine for a broken world.” —Daniel José Older

“Master of Poisons makes me laugh, gasp, and dream of the world we are so desperately holding onto and of a better world yet to come... I am so grateful Andrea hasn't given up on us! May she keep gifting our world with her expansive imagination throughout the years!” —Sheree Renée Thomas

“Nobody does it better than Andrea Hairston, and if you doubt it, just open Master of Poisons and follow her into the light.” —Pearl Cleage

“Andrea Hairston's writing is not to be missed. Her fantasy is rich with evocative detail, stunning and original, and her characters deeply humane and engaging. This is the kind of fantasy that expands your mind and warms your heart.” —Martha Wells, on Master of Poisons

“The entire work is filled with magic, celebrating West Africans, Native Americans, art, and love that transcends simple binary genders. Hairston's novel is a completely original and stunning work.” —Publishers Weekly, on Will Do Magic for Small Change