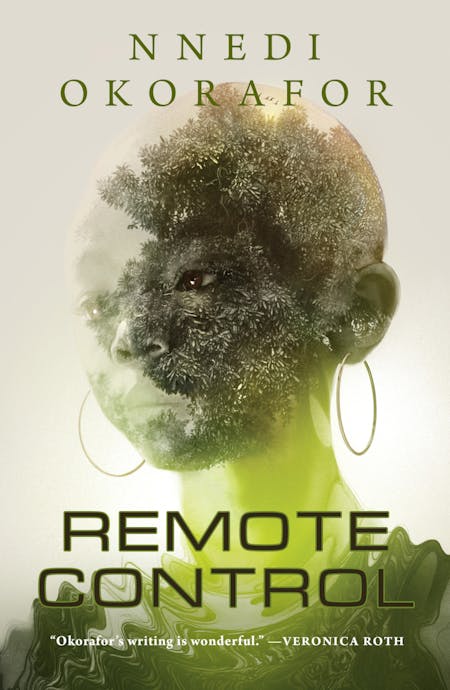 An alien artifact turns a young girl into Death's adopted daughter in Remote Control, a thrilling sci-fi tale of community and female empowerment from Nebula and Hugo Award-winner Nnedi Okorafor

“She’s the adopted daughter of the Angel of Death. Beware of her. Mind her. Death guards her like one of its own.”

The day Fatima forgot her name, Death paid a visit. From hereon in she would be known as Sankofa­­—a name that meant nothing to anyone but her, the only tie to her family and her past.

Her touch is death, and with a glance a town can fall. And she walks—alone, except for her fox companion—searching for the object that came from the sky and gave itself to her when the meteors fell and when she was yet unchanged; searching for answers.

But is there a greater purpose for Sankofa, now that Death is her constant companion?

"Riveting from its opening page... lyrical and compelling." —Essence

"Episodic and organic, the story winds along with a limber rhythm that allows every rich detail of Sankofa's surreal world to surface. It's a cumulative narrative, a slow burn that builds in emotional urgency even as the scope of Okorafor's worldbuilding bursts into something breathtakingly vast." —NPR

"Thrilling and surprising all the way through." —The New Scientist

"[Okorafor] has a rare ability to open the reader's mind to various futures while creating complex characters and communities... A captivating world, a tragic tale, and a dangerous future." —Kirkus

"I loved so many things about Okorafor’s book. The futuristic details have wit, energy and brilliance, but there is also genuine depth to the narrative: a serene, folktale-ish cadence that feels timeless." —bookreporter

"As the winner of Nebula and Hugo awards, Okorafor has been embraced by the field, and in Remote Control she takes the acclaim and uses it — in an assured manner — to radically undermine the stories that the world tells to manifest its power." —L.A. Review of Books

"A beautiful, sad, enthralling novella set in a futuristic Africa, Remote Control is a refreshing oasis of creativity... I implore you to discover this lovely, captivating story for yourself." —BookPage

"Okorafor builds a stunning landscape of futuristic technology and African culture, with prose that will grab readers from the first sentence." —Library Journal starred review

"This imaginative, thought-provoking story uses elements of the fantastic to investigate the complexities of gender and community outside of a European, colonial imagination. Readers will be blown away." —Publishers Weekly starred review

"Full of emotional depth and resonance, this is beautiful." —The Big Issue

"Okorafor's writing is even more beautiful than I remember it being in Binti, evocative and sharply elegant in its economy." —NPR on Binti: Home