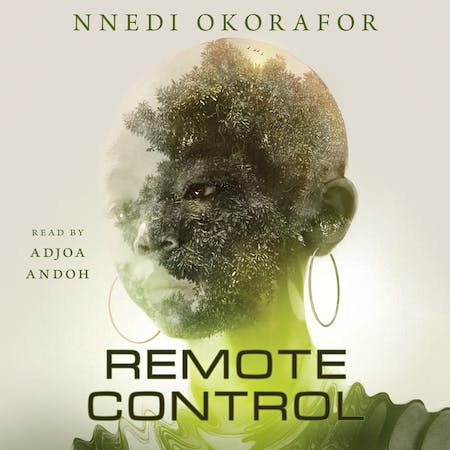 An alien artifact turns a young girl into Death's adopted daughter in Remote Control, a thrilling sci-fi tale of community and female empowerment from Nebula and Hugo Award-winner Nnedi Okorafor

Winner of the AudioFile Earphones Award

"Narrator Adjoa Andoh captivates listeners with a stunning new sci-fi novella set in a near-future Ghana. Andoh is perfectly in tune with Okorafor's compelling story, smoothly switching between her British accent as the narrator and the intonations of the vibrant characters she brings to life." -- AudioFile Magazine

“She’s the adopted daughter of the Angel of Death. Beware of her. Mind her. Death guards her like one of its own.”

The day Fatima forgot her name, Death paid a visit. From hereon in she would be known as Sankofa­­—a name that meant nothing to anyone but her, the only tie to her family and her past.

Her touch is death, and with a glance a town can fall. And she walks—alone, except for her fox companion—searching for the object that came from the sky and gave itself to her when the meteors fell and when she was yet unchanged; searching for answers.

But is there a greater purpose for Sankofa, now that Death is her constant companion?