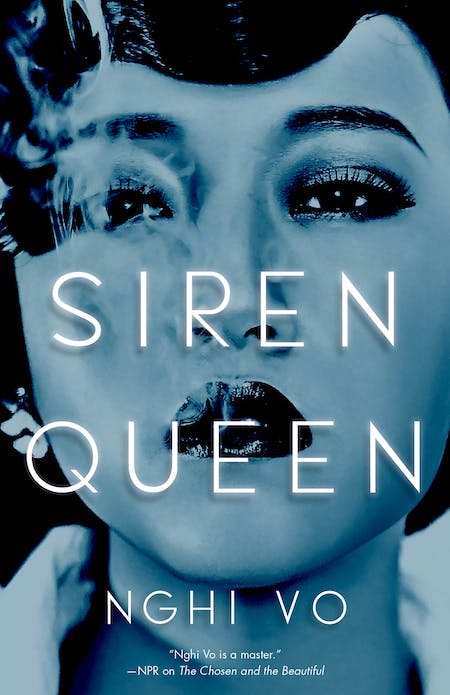 “No maids, no funny talking, no fainting flowers.” Luli Wei is beautiful, talented, and desperate to be a star. Coming of age in pre-Code Hollywood, she knows how dangerous the movie business is and how limited the roles are for a Chinese American girl from Hungarian Hill—but she doesn't care. She’d rather play a monster than a maid.

Amazon Best of the Year pick!

"Nghi Vo’s reimagining of old Hollywood as a world rife with fae trickery, ambition, and greed is as clever as it is dazzling, as incisive as it is empowering. Vo’s heroine is captivating, her atmosphere heady and sensual, her storytelling spellbinding. Escape into this book, but be warned—it may not let you go."—Olivie Blake, New York Times-bestselling author of The Atlas Six

"Vo creates an absorbing narrative about success and survival."—Time Magazine

"Nghi Vo can take even the most ordinary of actions and describe it in a way you never thought of before and do it with heartbreaking beauty and layers of subtext."—Alex Brown, NPR

"Imagines the golden age of Hollywood as a fantastical world where monsters control the industry through dark rituals of blood and ancient magic. But Luli Wei is set on becoming a star no matter the cost, taking readers on an enthralling journey to achieve stardom on her own terms."—The Washington Post

"Were you mesmerised by the enchantment of Erin Morgenstern’s The Night Circus and the glamour of Taylor Jenkins Reid’s The Seven Husbands Of Evelyn Hugo? Then you’ll fall in love with this."—HuffPost UK

"This riveting novel so deeply enmeshes magic with reality that it often feels impossible to differentiate the two. It’s a breathtaking read."—Margaret Kingsbury, Buzzfeed

“Nghi Vo has become one of my favorite writers, and Siren Queen is lush and brilliant, a mesmerizing journey into a pre-code Hollywood that is all sharp edges, with the darkest magic and highest stakes.”—Martha Wells, author of Network Effect

"Vo imagines the golden age of Hollywood as full of fey and dangerous creatures ready to claim your soul in exchange for fame on the big screen. . . . This book kept me up reading until the late hours."—Rebecca Roanhorse, New York Times bestselling author of Black Sun

“Searing and seductive, Siren Queen is the kind of book that leaves you wrecked on its shores. When I look up at the stars, I'll think of Luli.”—Alix E. Harrow, New York Times-bestselling author of The Once and Future Witches

“In this stellar novel, Vo turns Hollywood into a fairyland—the kind from the old stories, sharp and dangerous—and laces the sparkling silver romance of the movies with a dark, exploitative, hungry greed. . . . Pair that vivid world with the stubborn, passionate Luli and a pace that turns from slow and delightfully sexy to vast and terrifying with the turn of a page and you have the brilliantly searing Siren Queen.”—Booklist (starred review)

“Vo’s spellbinding latest solidifies her position as a force to be reckoned with in speculative fiction. [Her] hypnotic prose blends metaphor with magic so seamlessly that reality itself becomes slippery. Her dazzling voice, evocative scene setting, and ambitious protagonist make this a knockout.”—Publishers Weekly (starred review)

"Movie magic is made manifest, beguiling, and deadly in Vo’s tale about Luli, a Chinese American girl who is determined to realize her dreams of movie stardom. . . . Luli is a compelling character both on and off the screen in this story that takes the mythmaking of Hollywood and transforms it and her into something transcendent. Highly recommended."—Library Journal (starred review)

"Vo packs the novel with themes of racism, queer identity, immigrant experience and the freedom to define one's own life and relationships, while maintaining a richly cultivated and dreamlike world. With lush imagery and a gorgeously rendered atmosphere worthy of its complex heroine, Siren Queen is magical realism at its most beautiful and intoxicating."—Shelf Awareness (starred review)

"A piece of perfection. It is queer and it is unapologetic and it is loving and it is a reminder that we can survive our demons, that we can outsmart them, that we can beat them at their own game."—Cassandra Khaw, USA Today bestselling author of Nothing But Blackened Teeth

“The book of my dreams—vivid, sensual, frightening, and inexpressibly gorgeous, often in the same sentence. . . . Nghi Vo is a magician—no—maybe a god.”—Kelly Robson, author of Gods, Monsters & the Lucky Peach

"It’s a clever bit of craftsmanship the way Nghi Vo braids the fantastical into the earthly in her story of a queer Chinese American actress breaking into the movie biz at the dawn of the talkie era."—The Philadelphia Inquirer