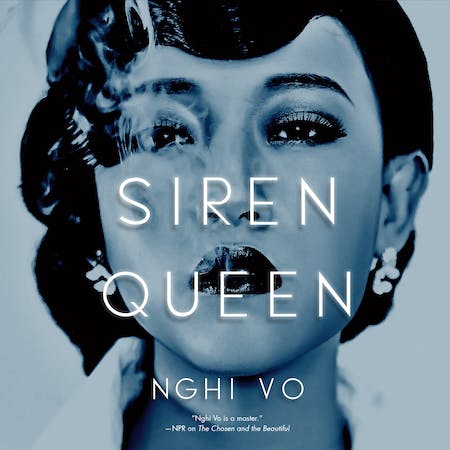 "No maids, no funny talking, no fainting flowers." Luli Wei is beautiful, talented, and desperate to be a star. Coming of age in pre-Code Hollywood, she knows how dangerous the movie business is and how limited the roles are for a Chinese American girl from Hungarian Hill—but she doesn't care. She’d rather play a monster than a maid.

Praise for The Chosen and The Beautiful:

“Why not raise a glass to Nghi Vo, whose name on the spine of a book seems to mean that whatever the pages within hold will be superlative?”—NPR

“Stellar. . . . Like Jordan’s own paper creations, The Chosen and the Beautiful captivates with its artistry and its power.”—Helene Wecker, author of The Golem and the Jinni

“Nghi Vo subverts and expands the possibilities of an American story, and magic is in the marrow.”—K-Ming Chang, author of Bestiary

“Astonishingly crafted, with luscious prose and appeal for both fans of the original and those who always felt The Great Gatsby missed the mark.”—Kirkus Reviews (starred review)

“Luxurious, thrilling, and sexy. . . . The Chosen and the Beautiful brings new intensity to a story you thought you knew.”—Adrienne Celt, author of Invitation to a Bonfire

“A page-turning novel of sorcery, infernal compacts, and enchanted elixirs. . . Redo all the classics. And do them like this!”—P. Djèlí Clark, winner of the Alex, Locus, and Nebula Awards and author of Ring Shout

“A sumptuous novel that tangles with race, magic, sexuality, and class. . . . It’s bold to play in the realm of The Great Gatsby and Vo’s acerbic Jordan Baker is the perfect woman to do it.”—Erika Swyler, author of The Book of Speculation

“Gatsby the way it should have been written–dark, dazzling, and fantastical.”—R. F. Kuang, winner of the Astounding Award and author of The Poppy War