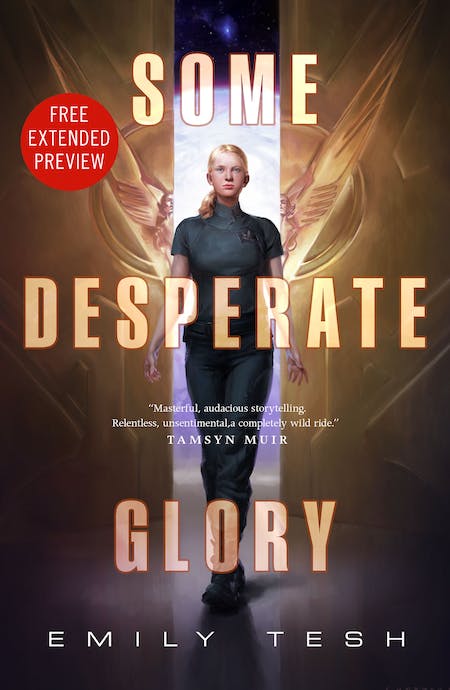 A thrillingly told queer space opera about the wreckage of war, the family you find, and who you must become when every choice is stripped from you, Some Desperate Glory is Astounding Award Winner and Crawford Award Finalist Emily Tesh’s highly anticipated debut novel. Download a FREE sneak peek today!

While we live, the enemy shall fear us.

Since she was born, Kyr has trained for the day she can avenge the murder of planet Earth. Raised in the bowels of Gaea Station alongside the last scraps of humanity, she readies herself to face the Wisdom, the powerful, reality-shaping weapon that gave the majoda their victory over humanity.

They are what’s left. They are what must survive. Kyr is one of the best warriors of her generation, the sword of a dead planet. When Command assigns her brother to certain death and relegates her to Nursery to bear sons until she dies trying, she knows must take humanity's revenge into her own hands.

Alongside her brother’s brilliant but seditious friend and a lonely, captive alien, Kyr escapes from everything she’s known into a universe far more complicated than she was taught and far more wondrous than she could have imagined.

EMILY TESH, winner of the Astounding Award and a Crawford Award finalist, is the author of the World Fantasy Award-winning Greenhollow Duology, which begins with the novella Silver in the...