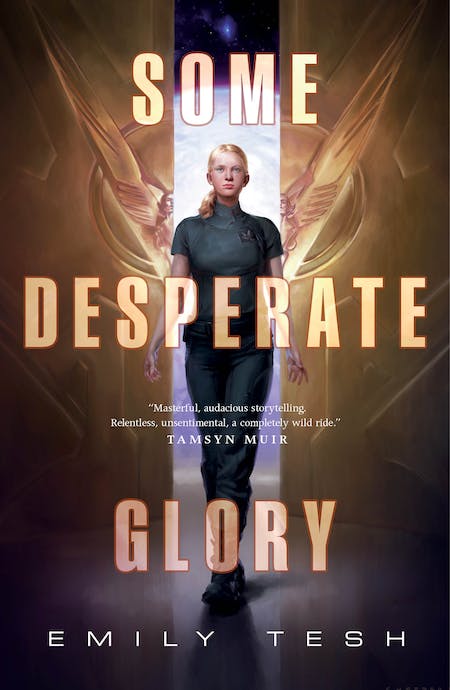 A thrillingly told queer space opera about the wreckage of war, the family you find, and who you must become when every choice is stripped from you, Some Desperate Glory is Astounding Award Winner and Crawford Award Finalist Emily Tesh’s highly anticipated debut novel.

While we live, the enemy shall fear us.

Since she was born, Kyr has trained for the day she can avenge the murder of planet Earth. Raised in the bowels of Gaea Station alongside the last scraps of humanity, she readies herself to face the Wisdom, the powerful, reality-shaping weapon that gave the majoda their victory over humanity.

They are what’s left. They are what must survive. Kyr is one of the best warriors of her generation, the sword of a dead planet. When Command assigns her brother to certain death and relegates her to Nursery to bear sons until she dies trying, she knows she must take humanity's revenge into her own hands.

Alongside her brother’s brilliant but seditious friend and a lonely, captive alien, Kyr escapes from everything she’s known into a universe far more complicated than she was taught and far more wondrous than she could have imagined.

EMILY TESH, winner of the Astounding Award and a Crawford Award finalist, is the author of the World Fantasy Award-winning Greenhollow Duology, which begins with the novella Silver in the...

Praise for Some Desperate Glory

“A monumental journey. . . . An intriguing space opera and study of radicalization, indoctrination, and what happens when one breaks free in the most absolute way.”–Library Journal, starred review

"Some Desperate Glory is honest, unflinchingly so. This book will hurt you and you will say thank you. It has everything you’d want in a queer space opera—wit and imagination and adventure, all within a brilliantly constructed world with an ‘unlikable’ and wholly irresistible lead. Reading this feels like bearing witness to something revolutionary... It will change you for the better."—Olivie Blake, New York Times bestselling author of The Atlas Six

"Kyr is a revelatory hero—never have I so fervently wished the worst for someone, only to end up cheering for them... Fierce and heartbreakingly humane, this book is for everyone who loved Ender’s Game, but Ender’s Game didn’t love them back."—Shelley Parker-Chan, Sunday Times bestselling author of She Who Became the Sun

"A profoundly humane and brilliantly constructed space opera that will have you cheering, swearing, laughing, and ugly-crying. It's perfect."—Alix E. Harrow, New York Times bestselling author of The Once and Future Witches

"This book hit me like a lightning bolt. From the destruction of Earth on the first page, to the human cult on a forgotten space station, to the indoctrinated teen soldier whose narrow worldview Tesh cracks open with pliers, this book is astoundingly good. An explosive and extraordinary story that I couldn't stop reading and will never forget."—Everina Maxwell, author of Winter's Orbit

"Devastatingly entertaining, horribly funny, Some Desperate Glory swoops through space and time with effortless precision, never pulling a punch or settling for an easy answer. There's nothing else like it."—A. K. Larkwood, author of The Unspoken Name

"Tesh’s sweeping epic wrestles with the nature of hatred, vengeance, and radicalization. The political theme of breaking away from fascist ideology pairs beautifully with smart sci-fi worldbuilding . . . and queer coming of age. This riveting adventure deserves a space on shelves alongside genre titans like Ursula K. Le Guin and Octavia Butler."—Publishers Weekly, starred review

“A monumental journey. . . . An intriguing space opera and study of radicalization, indoctrination, and what happens when one breaks free in the most absolute way.”–Library Journal, starred review

Praise for the World Fantasy Award-winning Silver in the Wood

"A true story of the woods, of the fae, and of the heart. Deep and green and wonderful."—Naomi Novik

"Find a quiet place in a nearby wood, listen to the trees whisper, and thank the old gods and new for this beautiful little book, of which I intend to get lost in again and again."—Book Riot