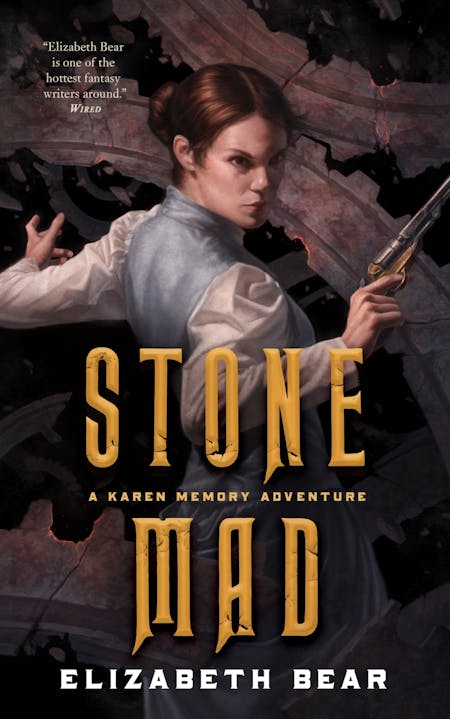 Now Karen is back with Stone Mad, a new story about spiritualists, magicians, con-men, and an angry lost tommy-knocker—a magical creature who generally lives in the deep gold mines of Alaska, but has been kidnapped and brought to Rapid City.

Karen and Priya are out for a night on the town, celebrating the purchase of their own little ranch and Karen’s retirement from the Hotel Ma Cherie, when they meet the Arcadia Sisters, spiritualists who unexpectedly stir up the tommy-knocker in the basement. The ensuing show could bring down the house, if Karen didn’t rush in to rescue everyone she can.

ELIZABETH BEAR was the recipient of the Astounding Award for Best New Writer in 2005. She has won two Hugo Awards and the Theodore Sturgeon Memorial Award for her short fiction. Bear lives in South...

“Bear's narrative skill and flair for both plot and character continue to impress.”—Booklist

“Karen Memory breezes by at a leisurely pace, a bracing yet charming adventure yarn that never feels forced, despite the brassy confidence of its delivery.” — Jason Heller, NPR

“Karen Memory is a delight, a tour-de-force of historical reimagining and character creation, and a ripping yarn full of surprises.”—Russell Letson for Locus

“Bear pumps fresh energy in the steampunk genre with a light touch on the gadgetry and a vivid sense of place. Karen has a voice that is folksy but true, and the entire cast of heroic women doing the best they can in an age that was not kind to their gender is a delight.” —Library Journal, starred review