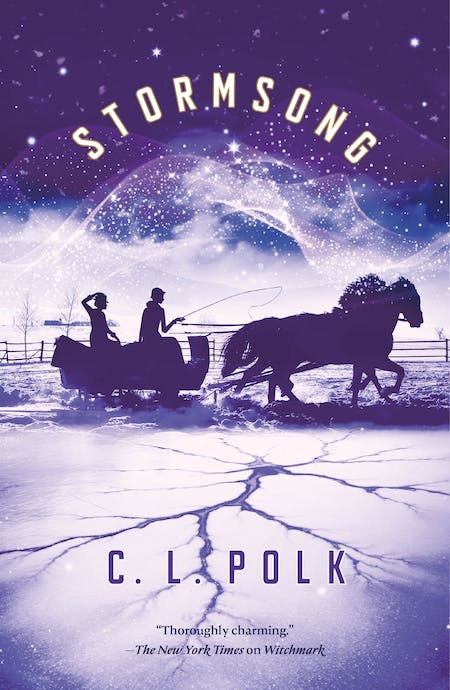 After spinning an enthralling world in Witchmark, the winner of the World Fantasy Award for best novel that was praised as a “can't-miss debut” by Booklist, and as “thoroughly charming and deftly paced” by the New York Times, C. L. Polk continues the Kingston Cycle in Stormsong. Magical cabals, otherworldly avengers, and impossible love affairs conspire to create a book that refuses to be put down.

Dame Grace Hensley helped her brother Miles undo the atrocity that stained her nation, but now she has to deal with the consequences. With the power out in the dead of winter and an uncontrollable sequence of winter storms on the horizon, Aeland faces disaster. Grace has the vision to guide her parents to safety, but a hostile queen and a ring of rogue mages stand in the way of her plans. There's revolution in the air, and any spark could light the powder. What's worse, upstart photojournalist Avia Jessup draws ever closer to secrets that could topple the nation, and closer to Grace's heart.

Can Aeland be saved without bloodshed? Or will Kingston die in flames, and Grace along with it?

"[Stormsong is] a marvelously readable novel set in a fun world." —Locus

"A thoughtful and passionate depiction of one woman's struggle to discover her truest self." —Kirkus Reviews