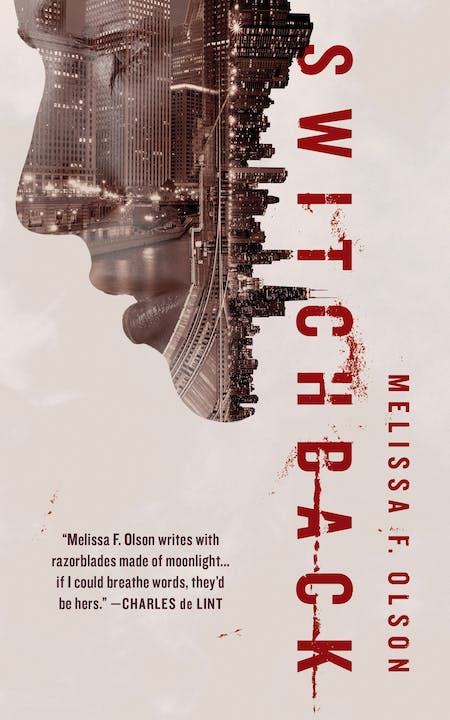 The Bureau of Preternatural Investigations returns in Switchback, the sequel to Melissa F. Olson's Nightshades.

Three weeks after the events of Nightshades, things are finally beginning to settle for the Chicago branch of the BPI, but the brief respite from the horror of the previous few weeks was never destined to last.

The team gets a call from Switch Creek, IL, where a young man has been arrested on suspicion of being a shade.

The suspect is held overnight, pending DNA testing, but seemingly escapes in a terrifying and bloody massacre. But is there more to the jailbreak than a simple quest for freedom?

Melissa F. Olson is the author of the Scarlett Bernard series of urban fantasy novels for Amazon's 47North and the mystery The Big Keep.

She lives in Madison, WI, with her family and...

"Melissa F. Olson writes with razorblades made of moonlight, cutting through shadows to share with us the beating heart of her characters and story. My only problem with being immersed in Nightshades is that I had to keep coming up for air. If I could breathe words, they’d be hers." — Charles de Lint, World Fantasy Award Winner

“A page burner that left me wanting to be able to one click that next book! You will not be able to turn away from Nightshades”! — Shannon Mayer, USA Today bestselling author of the Elemental series

"Nightshades is a fast-paced, action-filled clash between federal agents and vampires. For anyone looking for a new twist on the old mythology of bloodsucking fiends, Melissa F. Olson knows how to deliver the sharp end of the stake.” — Christopher Farnsworth, author of The President's Vampire and Killfile

"Nightshades is a tautly written paranormal mystery, and Melissa Olson’s bloodsuckers don’t screw around. This is a suspenseful, fast-paced, enjoyable read—a bloody-knuckled X-Files with a dash of Silence of the Lambs, featuring the scariest vampires this side of Peter Watts’ Blindsight." —Marko Kloos, author of the Frontlines series