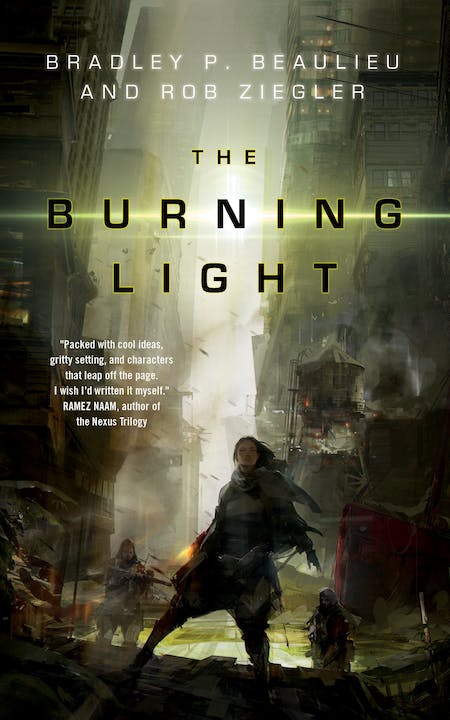 Disgraced government operative Colonel Chu is exiled to the flooded relic of New York City. Something called the Light has hit the streets like an epidemic, leavings its users strung out and disconnected from the mind-network humanity relies on. Chu has lost everything she cares about to the Light. She’ll end the threat or die trying.

A former corporate pilot who controlled a thousand ships with her mind, Zola looks like just another Light-junkie living hand to mouth on the edge of society. She’s special though. As much as she needs the Light, the Light needs her too. But, Chu is getting close and Zola can’t hide forever.

The Burning Light is a thrilling and all-too believable science fiction novella from Bradley P. Beaulieu and Rob Ziegler, the authors of Twelve Kings in Sharakhai and Seed.

"A gripping tale of spirit and determination set in a truly harrowing future. You must learn the truth behind The Burning Light!" —New York Times bestselling author Jason M. Hough

"[Beaulieu and Ziegler] imbue this novella with the emotional heft of something much grander through sharp characterizations, detailed worldbuilding, violent descriptions, and thunderous action pieces." —Publishers Weekly, starred review

"Freaking awesome. Packed with cool ideas, gritty setting, and characters that leap off the page. I wish I'd written it myself." —Ramez Naam, multi-award-winning author of the Nexus Trilogy

"The Burning Light is strange, unnerving, and disturbingly unfamiliar while managing to be utterly compelling and absorbing. It is startlingly good reading." —David Liss, Edgar Award winner

"The Burning Light delivers." —Nerds of a Feather