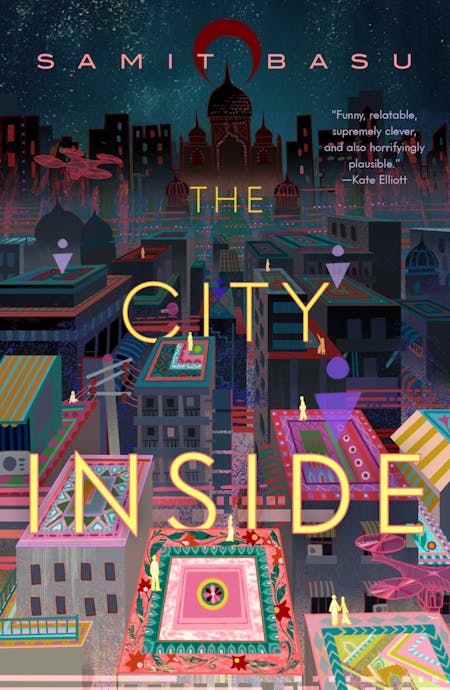 Featured in The Washington Post “The 9 best science fiction and fantasy novels of 2022”!

The City Inside, a near-future epic by the internationally celebrated Samit Basu, pulls no punches as it comes for your anxieties about society, government, the environment, and our world at large—yet never loses sight of the hopeful potential of the future.

Joey is a Reality Controller in near-future Delhi. Her job is to supervise the multimedia multi-reality livestreams of Indi, one of South Asia’s fastest rising online celebrities—who also happens to be her college ex. Joey’s job gives her considerable culture power, but she’s too caught up in day-to-day crisis handling to see this, or to figure out what she wants from her life.

Rudra is a recluse estranged from his wealthy and powerful family, now living in an impoverished immigrant neighborhood. When his father’s death pulls him back into his family’s orbit, an impulsive job offer from Joey becomes his only escape from the life he never wanted.

But as Joey and Rudra become enmeshed in multiple conspiracies, their lives start to spin out of control—complicated by dysfunctional relationships, corporate loyalty, and the never-ending pressures of surveillance capitalism. When a bigger picture begins to unfold, they must each decide how to do the right thing in a world where simply maintaining the status quo feels like an accomplishment. Ultimately, resistance will not—cannot—take the same shape for these two very different people.

Samit Basu is an Indian novelist. He's published several novels in a range of speculative genres, all critically acclaimed and bestselling in India, beginning with The Simoqin...

Featured in The Washington Post “The 9 best science fiction and fantasy novels of 2022”!

“Basu’s evocative and thrilling novel explores with warmth and snark a future Delhi. The City Inside feels like a lost season of Black Mirror.”—The Washington Post

“The City Inside is one of the most horrifyingly plausible near futures I have ever read. It's also funny, relatable, supremely clever, and deeply political. Highly recommended.”—Kate Elliott, New York Times bestselling author

“An extraordinary, immersive read about a horribly plausible near future of grotesque wealth disparity, climate change, abusive yet useless government, invasive technology, and people carefully ignoring it all by plugging themselves into electronic entertainment. To say it hits home is an understatement. . . . Brilliantly written, structurally inventive, completely immersive.”—KJ Charles, author of The Magpie Lord

“The City Inside is a triumphant exploration of near-future India that is as compelling as it is urgent. Don't miss this one.”—Lavie Tidhar, World Fantasy Award-winning author

“The most terrifying dystopian I've read in a long while, because it's so plausible. Can't recommend enough.”—Tasha Suri, award-winning author of The Jasmine Throne

“An instant classic. . . . Captures in perfectly immersive disorientation the sense of India as a country perpetually spaghettifying in the event horizon between competing mythic pasts and futures.”—Indra Das, author of The Devourers

“Peopled with a vivid cast of characters in an eerily plausible near-future setting echoing the horrors and absurdities of our present moment, The City Inside is SF at its best—fizzing with ideas, entertaining, revelatory and humane. I've never read anything quite like it.” —Zen Cho, author of Black Water Sister

“Basu's chief strengths as a novelist are character development, lively dialogue and a pleasingly off-kilter sense of humour.”—Vogue India

“The City Inside imagines a surveillance-state version of Delhi beset by futuristic traps and wonders, at once claustrophobic and brimming with possibility.”—The Philadelphia Inquirer

“A complex achievement in world-building.”—BookBub

“There’s a chilling effect to Basu’s new near-future sf epic... Readers will empathize with Joey’s dilemma... The novel’s theme, that the truth does not and cannot set anyone free, is as disturbing as it is thought-provoking.”—Library Journal

“The reader’s immersion into their world is truly felt... as one character sums it all up, “What is the point of this tech if it can’t tell us the truth?” Unlike a lot of cyberpunk novels, which seem to contain a fair amount of physical violence, Basu explores spiritual violence.”—Booklist

“It infuriates me, then, that a novel as passionate, as angry and as smart as [The City Inside] has not been published outside of India. We need more books like this... books that rail, through the prism of science fiction, against populism, racism and oppression, books that confirm that the problems we face are global, not local.” - Locus

“Basu’s characters might not be having a good time “in the f***ing middle of it”, but he is certainly having tremendous fun working within the outer limits of what our warped near-future could look like… his portrayal of the relationships between characters is masterfully sensitive to detail.” – India Today

“We need science fiction like this. Our world is more interconnected than it has ever been. What happens in India today can easily happen in Europe and North America tomorrow. Indeed, some of it already is.” - Salon Futura

“[The City Inside] by Samit Basu should be on everyone's radar... Neo-cyberpunk in the vein of Lauren Beukes's Moxyland and Tade Thompson's Rosewater, with an emphasis on influencer culture, online surveillance, and the constant churn of apocalyptic news.” - Critic Abigail Nussbaum

“He does not set himself to write a dystopia because dystopias need distance, which is no longer possible in a world where we are already in the midst of the horrors.” - Strange Horizons