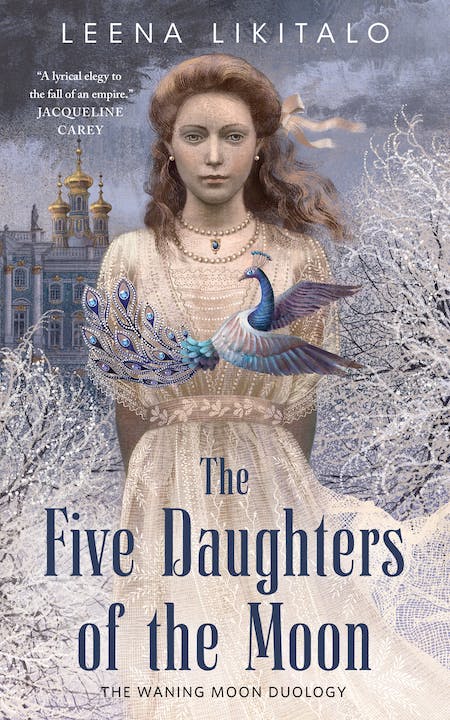 Inspired by the 1917 Russian revolution and the last months of the Romanov sisters, The Five Daughters of the Moon by Leena Likitalo is a beautifully crafted historical fantasy with elements of technology fueled by evil magic.

The Crescent Empire teeters on the edge of a revolution, and the Five Daughters of the Moon are the ones to determine its future.

Alina, six, fears Gagargi Prataslav and his Great Thinking Machine. The gagargi claims that the machine can predict the future, but at a cost that no one seems to want to know.

Merile, eleven, cares only for her dogs, but she smells that something is afoul with the gagargi. By chance, she learns that the machine devours human souls for fuel, and yet no one believes her claim.

Sibilia, fifteen, has fallen in love for the first time in her life. She couldn't care less about the unrests spreading through the countryside. Or the rumors about the gagargi and his machine.

Elise, sixteen, follows the captain of her heart to orphanages and workhouses. But soon she realizes that the unhappiness amongst her people runs much deeper that anyone could have ever predicted.

And Celestia, twenty-two, who will be the empress one day. Lately, she's been drawn to the gagargi. But which one of them was the first to mention the idea of a coup?

Inspired by the 1917 Russian revolution and the last months of the Romanov sisters, The Five Daughters of the Moon is a beautifully crafted historical fantasy with elements of technology fuelled by evil magic.

“The Five Daughters of the Moon is a lyrical elegy to the fall of an empire, a dreamscape of a tale unfolding through the prismatic view of its five ill-fated protagonists.” — Jacqueline Carey

"Likitalo has written a very promising debut, one that hopefully portends an interesting career." —Locus

"A fantasy landscape both familiar and otherworldly comes to life in this absorbing, imaginative tale." —Publishers Weekly