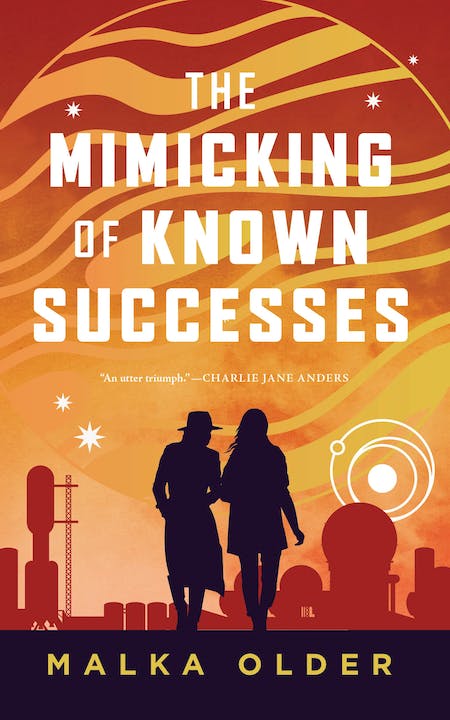 The Mimicking of Known Successes presents a cozy Holmesian murder mystery and sapphic romance, set on Jupiter, by Malka Older, author of the critically-acclaimed Centenal Cycle.

On a remote, gas-wreathed outpost of a human colony on Jupiter, a man goes missing. The enigmatic Investigator Mossa follows his trail to Valdegeld, home to the colony’s erudite university—and Mossa’s former girlfriend, a scholar of Earth’s pre-collapse ecosystems.

Pleiti has dedicated her research and her career to aiding the larger effort towards a possible return to Earth. When Mossa unexpectedly arrives and requests Pleiti’s assistance in her latest investigation, the two of them embark on a twisting path in which the future of life on Earth is at stake—and, perhaps, their futures, together.

"Older has created a wonderfully sci-fi take on the gaslamp mystery. Add in the wry depiction of academia and the warmly authentic portrayal of a relationship in the process of rekindling, and this is exactly my kind of story!"—Freya Marske

"A magnificently imaginative setting, a nicely developed and satisfyingly resolved mystery, a beautifully understated central romance, and a lot of thought-provoking ideas make this an immensely satisfying read [that] does more at novella length than many books manage in three times as much."—K. J. Charles

“Malka Older has created a far-flung speculative winner that is as much hard science fiction as it is gritty xenobiological noir, with characters you want to see get closer. . .to the possible killer and each other. I am absolutely in love with this world and these characters.”—Fran Wilde

"It’s hard to pull off a novel that attempts to have equal footing in two genres—never mind three—and typically one of the genres ends up taking on a minor role . . . but The Mimicking of Known Successes, a work of speculative fiction, a traditional mystery, and a romance, is a walloping success."—First Clue, starred review

"Reading this novella was an absolute delight . . . I can imagine further stories set in this world; if I’m very lucky, they will feature Mossa and Pleiti."—Locus

"Recommended for readers who enjoy a bit of mystery mixed with their SF . . . and anyone who cannot resist a Sherlock Holmes pastiche."—Library Journal