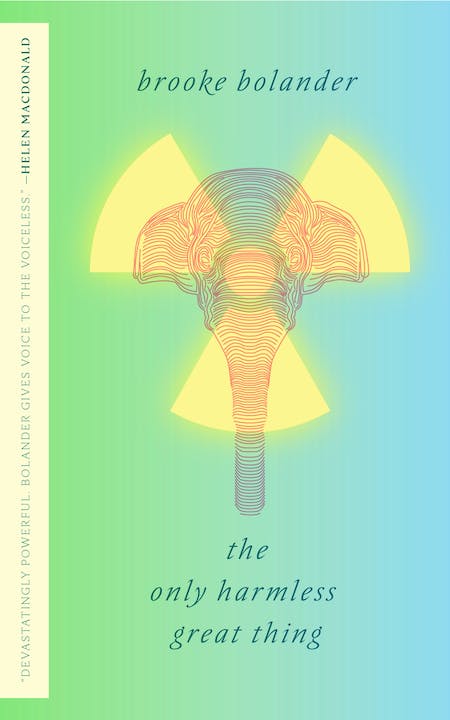 Winner of the Nebula Award for Best Novelette

Finalist for the Hugo, Locus, Shirley Jackson, and Sturgeon Awards

The Only Harmless Great Thing is a heart-wrenching alternative history by Brooke Bolander that imagines an intersection between the Radium Girls and noble, sentient elephants.

In the early years of the 20th century, a group of female factory workers in Newark, New Jersey slowly died of radiation poisoning. Around the same time, an Indian elephant was deliberately put to death by electricity in Coney Island.

These are the facts.

Now these two tragedies are intertwined in a dark alternate history of rage, radioactivity, and injustice crying out to be righted. Prepare yourself for a wrenching journey that crosses eras, chronicling histories of cruelty both grand and petty in search of meaning and justice.

BROOKE BOLANDER writes weird things of indeterminate genre, most of them leaning rather heavily towards fantasy or general all-around weirdness. She attended the University of Leicester 2004-2007...

“Devastatingly powerful. The Only Harmless Great Thing is a searing meditation on myth, history, and the persistence of poison in all its terrible forms. Bolander gives voice to the voiceless with such controlled and perfect fury the pages seem to char and burn as you read. It feels like an alternate Just So Story revealed to us by an ecstatic punk oracle. I can’t stop thinking about it. Nor will you.” —Helen Macdonald, author of H is for Hawk

“Bolander's skilled prose always leaves me agog, but days after finishing The Only Harmless Great Thing, I'm still swimming around in its depths with a sense of wonder. It's beautiful and sad and relatable and unremittingly, crucially defiant.” —Kevin Hearne, New York Times bestselling author of the Iron Druid Chronicles

“This handcrafted arrow of a novella becomes more absorbing with each read.” —Kirkus

“The most beautiful and heart-breaking piece of work Bolander’s written to date.” —Amal El-Mohtar, Lightspeed Magazine

“Elephants have infrasound and memory and majesty; we have Brooke Bolander.” —Lawrence M. Schoen, author of Barsk: The Elephant's Graveyard

“A fierce and visionary Jumbo Agonistes aimed straight at the present day—mango-pulping, temple-smashing, exploding out of history with the all the grand power and folly of story.” —Max Gladstone, author of The Craft Sequence

“The Only Harmless Great Thing is Southern Gothic come to the big Northern City, where it settles in and begins to glow, dangerously, and to sing, mightily, and to break out and trample reality into a new shape. This book is transformative. I can hear echoing long after I've set it down.” —Fran Wilde, author of Updraft, Cloudbound, and Horizon.

“As succinct as it is beautiful: a snippet of times and of characters who struggle with unthinkable injustice.” —The Book Smugglers