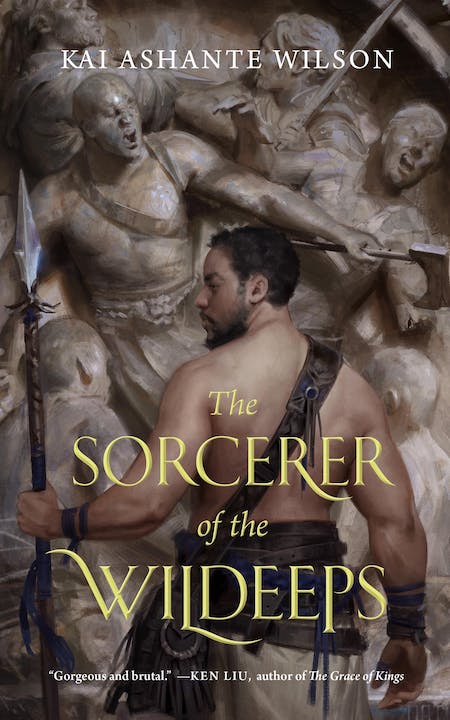 PRAISE FOR THE SORCERER OF THE WILDEEPS

"The unruly lovechild of Shakespeare, Baldwin, George RR Martin and Ghostface Killah -- this was a book I could not put down." - Daniel José Older, author of Half-Resurrection Blues

"Lyrical and polyphonous, gorgeous and brutal, THE SORCERER OF THE WILDEEPS is an unforgettable tale of love that empowers." - Ken Liu, multiple Hugo Award-winning author of The Grace of Kings

"Wilson is doing something both very new and very old here: he's tossing aside the traditional forms of sword and sorcery in favor of other, older forms, and gluing it all together with a love letter to black masculinity. The result is powerful and strange and painful in all the right ways." -N.K. Jemisin, author of The Fifth Season and The Hundred Thousand Kingdoms

"THE SORCERER OF THE WILDEEPS reads like Gene Wolfe and Samuel R Delany trying to one-up each other on a story prompt by Fritz Leiber. That means it's good. Read it." - Max Gladstone, author of the Craft Sequence

"Seamlessly knots magic and science in a wholly organic way... THE SORCERER OF THE WILDEEPS will catch you by the throat and hold you fast until the last searing word." - Alyssa Wong, Nebula-nominated author of "The Fisher Queen"

"[The Sorcerer of the Wildeeps] shows that fantasy still has some really fascinating places to go." —Charlie Jane Anders, io9

“The Sorcerer of the Wildeeps... is the story equivalent of the shot heard around the world.” —Marty Cahill, BookRiot

“A tale which is so dense and rich in its depictions of the various different societies and places that you end it feeling as if you've been immersed in its world.” —Paul Simpson, Sci-Fi Bulletin

"Wilson isn't the first black writer to demonstrate the possibilities of mixing traditional fantasy tropes with African-American culture, of course, but few have concentrated so brilliantly on the linguistic implications of doing so." —Strange Horizons

“At its heart, Sorcerer of the Wildeeps is a beautiful yet brutal fairy tale about gods and monsters, loneliness and love. At 208 pages, the journey may not seem far but it will stay with you for a long time afterwards.” —Michaela Gray, Geek Syndicate