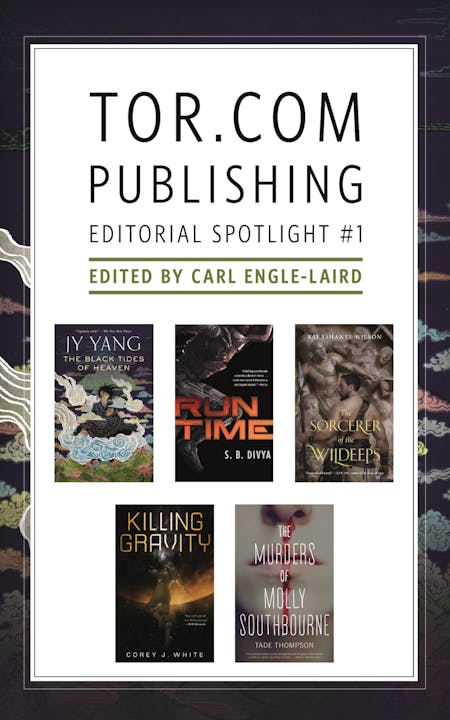 This collection includes:
The Black Tides of Heaven by JY Yang
Runtime by S.B. Divya
The Sorcerer of the Wildeeps by Kai Ashante Wilson
Killing Gravity by Corey J. White
The Murders of Molly Southbourne by Tade Thompson

A Finalist for the Hugo, Nebula, and World Fantasy Awards for Best Novella The Black Tides of Heaven is one of a pair of unique, standalone introductions to JY Yang's Tensorate Series, which Kate Elliott calls "effortlessly fascinating."

In S.B. Divya’s Runtime, the Minerva Sierra Challenge is a grueling spectacle, the cyborg's Tour de France. Rich thrill-seekers with corporate sponsorships, extensive support teams, and top-of-the-line exoskeletal and internal augmentations pit themselves against the elements in a day-long race across the Sierra Nevada.

Critically acclaimed author Kai Ashante Wilson makes his commercial debut with The Sorcerer of the Wildeeps, a striking, wondrous tale of gods and mortals, magic and steel, and life and death that will reshape how you look at sword and sorcery.

Mars Xi can kill you with her mind, but she'll need more than psychic powers to save her in Killing Gravity, the thrilling science fiction space adventure debut by Corey J. White.

Every time she bleeds a murderer is born. Experience the horror of Tade Thompson's The Murders of Molly Southbourne. A finalist for the 2017 BSFA Award, the 2017 Shirley Jackson Award.

S. B. Divya is a lover of science, math, fiction, and the Oxford comma. She enjoys subverting expectations and breaking stereotypes whenever she can. In her past, she’s used a telescope to find...

TADE THOMPSON is the author of the MOLLY SOUTHBOURNE BOOKS, the ROSEWATER novels, MAKING WOLF and FAR FROM THE LIGHT OF HEAVEN. He has won the Arthur C Clarke Award, the Nommo Award, the Prix...

“A thrilling romp through a gleaming cybernetic future that's neither dystopia nor utopia, but embedded in our reality—I wish more science fiction were as exciting and relevant as Runtime.”—Ken Liu on Runtime

"Wilson is doing something both very new and very old here: he's tossing aside the traditional forms of sword and sorcery in favor of other, older forms, and gluing it all together with a love letter to black masculinity. The result is powerful and strange and painful in all the right ways."—N.K. Jemisin on The Sorcerer of the Wildeeps

"A bold outpouring of flesh and crisis at once horrifying and familiar."—The New York Times on The Murders of Molly Southbourne