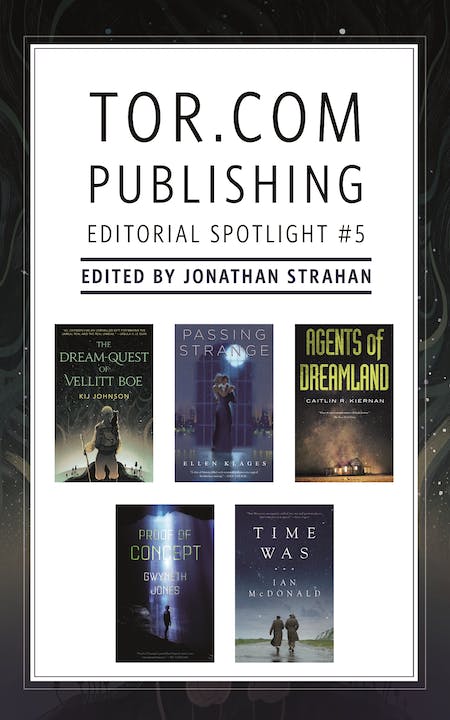 This collection includes:
The Dream-Quest of Vellitt Boe by Kij Johnson
Passing Strange by Ellen Klages
Agents of Dreamland by Caitlin R. Kiernan
Proof of Concept of Gwyneth Jones
Time Was by Ian McDonald

Professor Vellitt Boe teaches at the prestigious Ulthar Women’s College. When one of her most gifted students elopes with a dreamer from the waking world, Vellitt must retrieve her in Kij Johnson’s The Dream-Quest of Vellitt Boe

Inspired by the pulps, film noir, and screwball comedy, Passing Strange is a story as unusual and complex as San Francisco itself from World Fantasy Award winning author Ellen Klages,

KIJ JOHNSON is an American fantasy writer noted for her adaptations of Japanese myths and folklore. Her Tor.com story "Ponies" won the 2011 Nebula Award for Best Short Story. Her story "Fox Magic"...

Ian McDonald was born in 1960 in Manchester, England, to an Irish mother and a Scottish father. He moved with his family to Northern Ireland in 1965. He has won the Locus Award, the...

ELLEN KLAGES is the author of the acclaimed historical novels: The Green Glass Sea, which won the Scott O’Dell Award, and the New Mexico Book Award; and White Sands, Red Menace,...

"A remarkable accomplishment that repays rereading."—Pamela Sargent on The Dream-Quest of Vellit Boe

"Ellen Klages's love for queer San Francisco is evident in every line: its history, its mystery, and its people in all their variety and glory. I smiled as I read. You will, too."—Nicola Griffith on Passing Strange

"A delicious portrayal of what it feels like when that nagging voice in your head telling you something is wrong is in fact your only ally."—The Washington Post on Proof of Concept

"With echoes of H. G. Wells’s The Time Machine and replete with the inimitable scent of used bookstores, Time Was weaves an exquisite spell of love, war and quantum physics that is timeless in its appeal. A scientific romance in the most evocative sense of the word."—Nina Allan