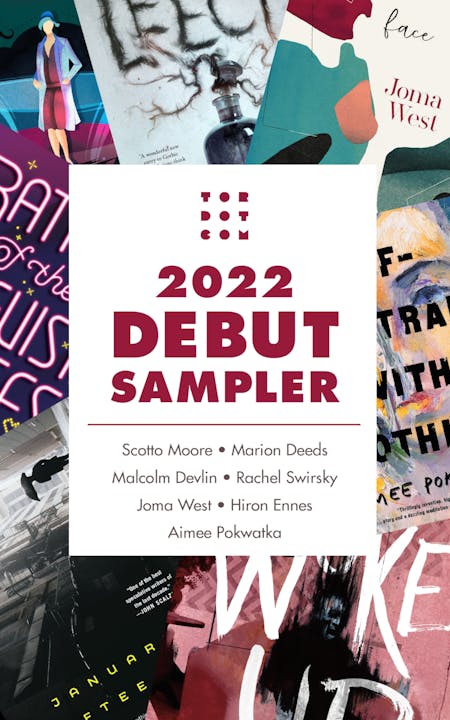 Tordotcom Publishing is proud to present a sneak peek of its 2022 debut novel and novella authors.

In modern day Los Angeles, a shadowy faction led by the Governor of California develops the arcane art of combat linguistics, planting the seeds of a future totalitarian empire in Scotto Moore's Battle of the Linguist Mages.

Marion Deed's Comeuppance Served Cold is a hard-boiled historical fantasy of criminality and magic, couched in the glamour of Miss Fisher's Murder Mysteries.

In the tradition of Mira Grant and Stephen Graham Jones, Malcolm Devlin’s And Then I Woke Up is a creepy, layered, literary story about false narratives and their ability to divide us.

Meet the cure for the human disease in this dark and infectious debut from Hiron Ennes. Leech is Edgar Allen Poe mixed with Ridley Scott, Jeff VanderMeer with a side of Charlotte Brontë, The Thing from the thing's point of view. It will worm its way deep into your bones and hold you hostage to your own insatiable human fascination.

Pepper Rafferty has lived her entire adult life knowing two things: that the famous artist, Ula Frost's, paintings are purported to harbor magical powers and that Ula Frost is the woman who gave her away. Aimee Pokwatka's Self-Portrait with Nothing is a heartstopping quest for truth written for a post-modern age with the world-melding of David Mitchell and the intimacy of Marilynn Robinson.

Scotto Moore is a Seattle playwright, whose works include the black comedy H.P. Lovecraft: Stand-up Comedian!, the sci-fi adventures Duel of the Linguist Mages and interlace...

Malcolm Devlin’s stories have appeared in Black Static, Interzone, The Shadow Booth and Shadows and Tall Trees. His first collection, You Will Grow Into Them, was published by Unsung...

Joma West is a third culture writer whose work straddles both fantasy and science fiction. Growing up bouncing between countries has given her work a certain displaced flavor and you can see many...

HIRON ENNES is a writer, musician, and student of medicine based in the Pacific Northwest. Their areas of interest include infectious disease, pathology, and anticapitalist healthcare reform. When...