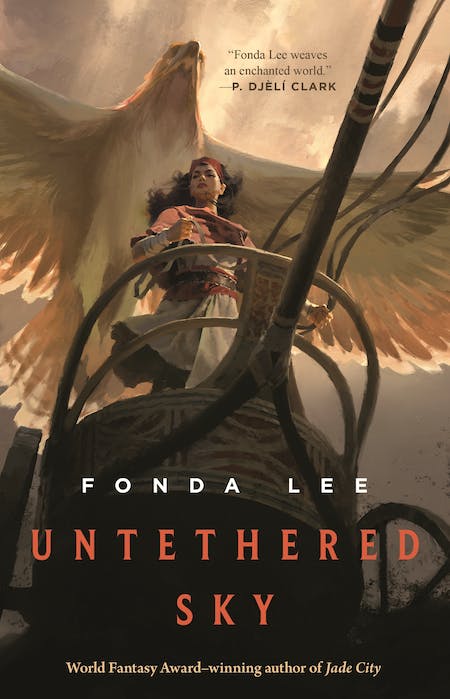 From World Fantasy Award-winning author Fonda Lee comes Untethered Sky, an epic fantasy fable about the pursuit of obsession at all costs.

A Most Anticipated in 2023 Pick for Polygon | Book Riot

Ester’s family was torn apart when a manticore killed her mother and baby brother, leaving her with nothing but her father’s painful silence and a single, overwhelming need to kill the monsters that took her family.

Ester’s path leads her to the King’s Royal Mews, where the giant rocs of legend are flown to hunt manticores by their brave and dedicated ruhkers. Paired with a fledgling roc named Zahra, Ester finds purpose and acclaim by devoting herself to a calling that demands absolute sacrifice and a creature that will never return her love. The terrifying partnership between woman and roc leads Ester not only on the empire’s most dangerous manticore hunt, but on a journey of perseverance and acceptance.

Fonda Lee is the World Fantasy Award-winning author of the epic fantasy Green Bone Saga, consisting of Jade City, Jade War, and Jade Legacy. She is also the author of the acclaimed...

"Fonda Lee wonderfully and brutally reimagines the mythic monster hunter with one of the most iconic and compelling literary duos I've ever read." - Matt Wallace, Hugo Award winner and author of the Savage Rebellion Trilogy

"A delicious morsel of heart’s flesh, its story as wild and yet poised in its craft as a stooping hawk. Fonda Lee’s characters are so real, broken and raw that they need no crowns, no wars, no prophesies to enlarge them. They simply, believably are, and in so being, they sweep us into a story as magical and wondrous as it is deft. One of the best fantasy novellas I’ve had the pleasure to read."—Christopher Buehlman

"A beautifully told story of a young woman, her magnificent, monstrous raptor, and her journey through grief, obsession, courage, and love."—Kate Elliott

"Fonda Lee weaves an enchanted world of giant majestic birds, those who would bond with them, and the terrifying monsters they must pursue. In this beautifully spun tale, a woman driven by loss and the pursuit of justice will be tested by the limits of her endurance, and how much she is willing to sacrifice."—P. Djèlí Clark

"[A] powerful story of emotional freedom and learning to love without regret."—Library Journal


Praise for The Green Bone Saga

“Lee’s Green Bone Saga is The Godfather with an Asian cast, Game of Thrones in a suit, tie and sunglasses. It has all the earmarks of a modern, international gangster epic juiced with boardroom intrigue, economic theory and swordfights.”—NPR on Jade Legacy

“Lee’s series will stand as a pillar of epic fantasy and family drama.”—Library Journal, starred review, on Jade Legacy

"[Lee] juggles the personal and the epic with deft, admirable skill, weaving a story that is equally sweeping and intimate."—NPR on Jade War

"Sweeping, leisurely, and epic, and combines political intrigue with sharply choreographed action scenes, but it's a character-driven family drama at its heart."—Publishers Weekly, starred review, on Jade War

"If you like extremely tense political maneuvering and intrigue, you will love Jade City. Fonda Lee is the new Mario Puzo; Jade City has officially dethroned The Godfather."—Sarah Gailey

"Stylish and action-packed, full of ambitious families and guilt-ridden loves, Jade City is an epic drama reminiscent of the best classic Hong Kong gangster films but set in a fantasy metropolis so gritty and well-imagined that you'll forget you're reading a book."—Ken Liu

"Jade City has it all: a beautifully realized setting, a great cast of characters, and dramatic action scenes. What a fun, gripping read!"—Ann Leckie