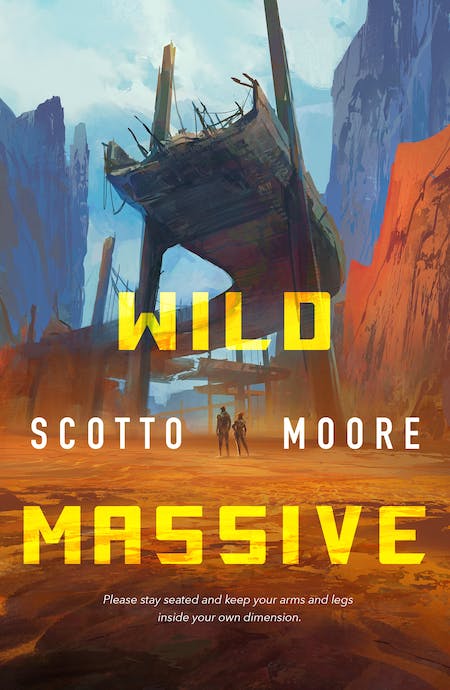 Scotto Moore's Wild Massive is a glorious web of lies, secrets, and humor in a breakneck, nitrous-boosted saga of the small rejecting the will of the mighty.

Welcome to the Building, an infinitely tall skyscraper in the center of the multiverse, where any floor could contain a sprawling desert oasis, a cyanide rain forest, or an entire world.

Carissa loves her elevator. Up and Down she goes, content with the sometimes chewy food her reality fabricator spits out, as long as it means she doesn’t have to speak to another living person.

But when a mysterious shapeshifter from an ambiguous world lands on top of her elevator, intent on stopping a plot to annihilate hundreds of floors, Carissa finds herself stepping out of her comfort zone. She is forced to flee into the Wild Massive network of theme parks in the Building, where technology, sorcery, and elaborate media tie-ins combine to form impossible ride experiences, where every guest is a VIP, the roller coasters are frequently safe, and if you don’t have a valid day pass, the automated defense lasers will escort you from being alive.

Wild Massive: The #1 destination for interdimensional war.
Rate us on VacationAdvisor™!

“This is a stand-alone novel with material enough for six...By the halfway point, it had blown my mind twice... an audacious, genre-bending whirlwind.” —The New York Times on Battle of the Linguist Mages

Your Favorite Band Cannot Save You

Battle of the Linguist Mages

“Throughout this sprawling, ambitious romp, Moore draws from numerous perspectives and gleefully embraces the inherent absurdity of both setting and premise... Readers are in for a rollicking trip through the fun house.” —Publishers Weekly

“By the halfway point, it had blown my mind twice and accumulated such cavalcades of incident that I couldn’t fathom where it had left to go — but it found places, and it went there.” —The New York Times

“Sparklepunk meets Snow Crash! One of those books that hits you with an amazing new idea every couple of pages, and it makes for a wild ride.” —Django Wexler

"A roller coaster of weird in this wildly entertaining gonzo adventure... Readers will love it as much for the outlandish ideas as for the narrative complexity and sense of fun." —Publishers Weekly


Praise for Your Favorite Band Cannot Save You

“Absolutely stunning. A fast-paced, psychedelic blur of music, tech, and things way beyond either. I picked it up, and it simply would not let me go until the final page was read.” —Ramez Naam

“Moore writes with a playful jauntiness that buoys the growing darkness rather than undercutting it. His details about a certain subset of music nerds give the story some great texture... the ride is a fun one and the soundtrack is killer.” —Locus