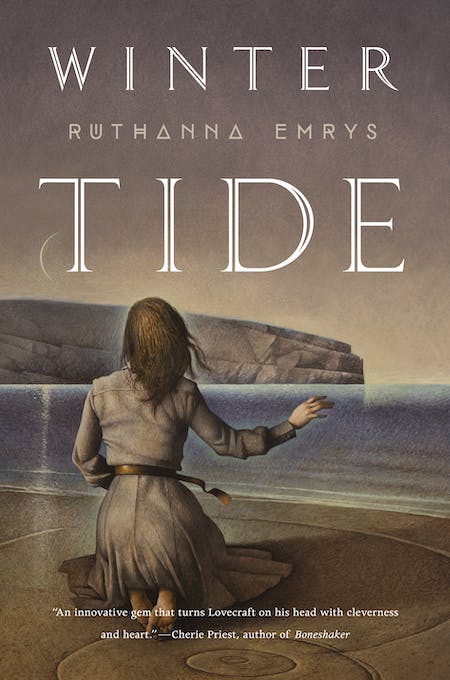 One of NPR's Best Books of 2017!
Finalist for the RT Award for Best Fantasy Novel

"Winter Tide is a weird, lyrical mystery — truly strange and compellingly grim. It's an innovative gem that turns Lovecraft on his head with cleverness and heart" —Cherie Priest

After attacking Devil’s Reef in 1928, the U.S. government rounded up the people of Innsmouth and took them to the desert, far from their ocean, their Deep One ancestors, and their sleeping god Cthulhu. Only Aphra and Caleb Marsh survived the camps, and they emerged without a past or a future.

The government that stole Aphra's life now needs her help. FBI agent Ron Spector believes that Communist spies have stolen dangerous magical secrets from Miskatonic University, secrets that could turn the Cold War hot in an instant, and hasten the end of the human race.

Aphra must return to the ruins of her home, gather scraps of her stolen history, and assemble a new family to face the darkness of human nature.

Winter Tide is the debut novel from Ruthanna Emrys. It is the first book in the Innsmouth Legacy series.

PRAISE FOR WINTER TIDE:
"Winter Tide is a weird, lyrical mystery — truly strange and compellingly grim. It's an innovative gem that turns Lovecraft on his head with cleverness and heart" —Cherie Priest, author of Maplecroft and Boneshaker

"A mythos yarn that totally reverses the polarity on Lovecraft's xenophobia, so that in the end the only real monsters are human beings." —Charles Stross, Hugo Award-winning author of the Laundry Files and the Merchant Princes series

"Winter Tide is a treasure chest. This is an excellent novel and I can't wait for more." —Victor LaValle, author of The Ballad of Black Tom and The Devil in Silver

"This is Wicked for the Cthulhu Mythos: never quite contradicting, but dancing through the shadows and dredging beautiful things out of the deep, pulling them, at last, into the light." —Seanan McGuire, New York Times bestselling author of Every Heart a Doorway

"I just want to hang out more with Aphra and her found family, not to mention her family under the sea. [Winter Tide] is a great story and a seamless subversion of Lovecraft’s most repellent views while simultaneously being a tribute to his greatest accomplishments." —Smart Bitches Trashy Books

"Emrys plots out an impressive book that updates Lovecraft’s creations with added nuance and empathy." —Andrew Liptak, The Verge

"Winter Tide is a delicious, rich concoction that centers its story on its characters." —Kirkus Reviews

"A generous novel, a kind one, and an exceptionally accomplished debut." —Liz Bourke for Locus Magazine

"Emrys uses the beautiful structures of Lovecraft to make a bold statement about difference and culture." —Booklist

"[I] will certainly be looking forward to anything else written by Ruthanna Emrys. [An] intriguing and welcoming book." —Forbidden Planet

“An engrossing story about othering and family that turns Lovecraft fascinatingly inside out.” —Jo Walton, Hugo Award-winning author of Among Others and The Just City

"Winter Tide shines an unexpected light on the shadow over Innsmouth, and shows how all creatures have to find common ground (or ocean) against evil." —Alex Bledsoe, author of Long Black Curl

"Emrys has done what Lovecraft never could — create complex characters in an intricate plot that engages the heart at the same time as it curdles the blood." —Sam J. Miller, winner of the Shirley Jackson Award

PRAISE FOR “THE LITANY OF EARTH”:
"'The Litany of Earth' by Ruthanna Emrys is something special... a fascinating spin on the Cthulhu Universe." —Charlie Jane Anders, author of All the Birds in the Sky

"What if Lovecraft’s undersea creatures were not creepy monsters, but a persecuted people? [...] Emrys does justice to the idea in this lovely story of alienation and finding a new life in the shadow of the old." —Aliette de Bodard, author ofThe House of Shattered Wings