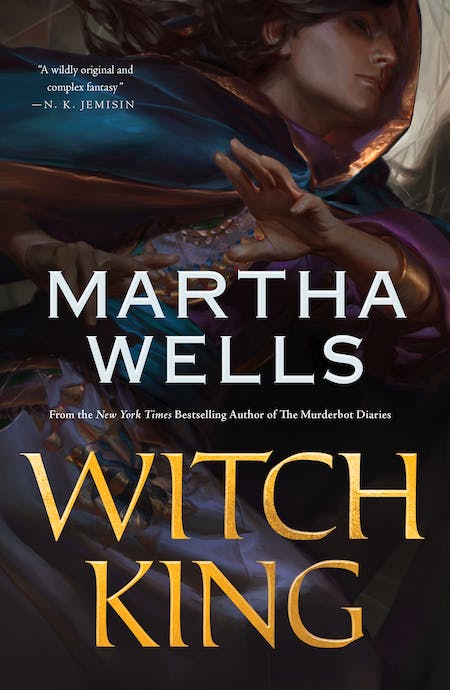 From the breakout SFF superstar author of Murderbot comes a remarkable story of power and friendship, of trust and betrayal, and of the families we choose.

After being murdered, his consciousness dormant and unaware of the passing of time while confined in an elaborate water trap, Kai wakes to find a lesser mage attempting to harness Kai’s magic to his own advantage. That was never going to go well.

But why was Kai imprisoned in the first place? What has changed in the world since his assassination? And why does the Rising World Coalition appear to be growing in influence?

Kai will need to pull his allies close and draw on all his pain magic if he is to answer even the least of these questions.

WITCH KING is Martha Wells’s first new fantasy in over a decade, drawing together her signature ability to create characters we adore and identify with, alongside breathtaking action and adventure, and the wit and charm we’ve come to expect from one of the leading writers of her generation.

“A wildly original and complex fantasy exploring how revolutions are won through trust, and destroyed through selfishness. Wells excels at brooding, powerful inhuman protagonists who just need a little kindness to be their badass best.” —N. K. Jemisin

“Unlike anything I've ever read. A layered and complex novel that delivers on the promise of epic fantasy.” —Zoraida Córdova