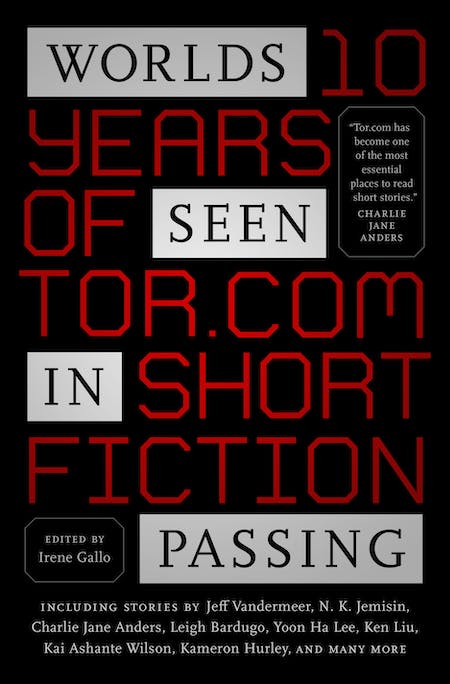 Winner of the World Fantasy Award

"A fresh new story going up at Tor.com is always an Event."—Charlie Jane Anders

Since it began in 2008, Tor.com has explored countless new worlds of fiction, delving into possible and impossible futures, alternate and intriguing pasts, and realms of fantasy previously unexplored. Its hundreds of remarkable stories span from science fiction to fantasy to horror, and everything in between. Now Tor.com is making some of those worlds available for the first time in print.

This volume collects some of the best short stories Tor.com has to offer, with Hugo and Nebula Award-winning short stories and novelettes chosen from all ten years of the program.

“The Best We Can” by Carrie Vaughn

“A Vector Alphabet of Interstellar Travel” by Yoon Ha Lee

“Waiting on a Bright Moon” by JY Yang

“Elephants and Corpses” by Kameron Hurley

“About Fairies” by Pat Murphy

“The Hanging Game” by Helen Marshall

“The Water That Falls on You from Nowhere” by John Chu

“A Cup of Salt Tears” by Isabel Yap

“The Litany of Earth” by Ruthanna Emrys

“Brimstone and Marmalade” by Aaron Corwin

“The Language of Knives” by Haralambi Markov

“The Shape of My Name” by Nino Cipri

“The Lady Astronaut of Mars” by Mary Robinette Kowal

“A Fist of Permutations in Lightning and Wildflowers” by Alyssa Wong

“A Kiss With Teeth” by Max Gladstone

“The Last Banquet of Temporal Confections” by Tina Connolly

“The End of the End of Everything” by Dale Bailey

“Your Orisons May Be Recorded” by Laurie Penny

“The Cage” by A.M. Dellamonica

“In the Sight of Akresa” by Ray Wood

“The Witch of Duva” by Leigh Bardugo

“Daughter of Necessity” by Marie Brennan

“Among the Thorns” by Veronica Schanoes

“These Deathless Bones” by Cassandra Khaw

“Mrs. Sorensen and the Sasquatch” by Kelly Barnhill

“This World Is Full of Monsters” by Jeff VanderMeer

“The Devil in America” by Kai Ashante Wilson

“A Short History of the Twentieth Century, or, When You Wish Upon A Star” by Kathleen Ann Goonan

IRENE GALLO is the publisher and creative director of Tor.com and Tor.com Publishing. As Tor Books’ creative director, Irene has established the look and design of an incalculable number of books...

"Tor.com hasn't just become one of the most essential places to read short stories online, it's also helped rekindle my excitement about short fiction. A fresh new story going up at Tor.com is always an Event." —Charlie Jane Anders

"Shiver-inducing, of the delicious variety."—Laini Taylor, The New York Times on Leigh Bardugo